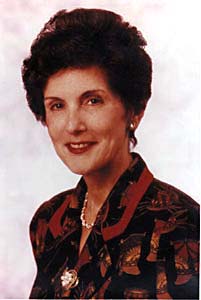 Rita Hauser is President of The Hauser Foundation. She is an international lawyer, senior Partner and now of counsel to the New York City law firm, Stroock, Stroock & Lavan. She is known for her public service and philanthropic work. Interested in world peace, security, and human rights, she has served as the U.S. Representative to the U.N. Commission on Human Rights, and on commissions affiliated with the U.S. Department of State, The Brookings Institution and the International Center for Peace in the Middle East. Dr. Hauser chairs The International Peace Academy and The Advisory Board of the RAND Center for Middle East Public Policy. She is a director of many organizations, including: The Rand Corporation, The International Institute For Strategic Studies in London, The New York Philharmonic Society and Lincoln Center for the Performing Arts. She is on the Visiting Committee of the John F. Kennedy School at Harvard University, on the Dean's Advisory Board of Harvard Law School, and chair of the Advisory Board of the Hauser Center for Nonprofit Organizations at Harvard University. Dr. Hauser is a National Co-Chair of the Harvard University Campaign. She holds advanced degrees from the University of Strasbourg in France, Harvard and NYU Law Schools, and the University of Paris Law Faculty.

Rita Hauser discusses her entry into the law profession as one of the early woman graduates of Harvard Law School in 1958 and also the difficulties of beginning a practice in international law. She describes her background in politics and the influence of her family. Her early support for Richard Nixon in New York led to her chairing his campaign there in 1968, and subsequently to her appointment as U.S. Representative to the U.N. Commission for Human Rights. In 1972, she co-chaired his national campaign. She describes her role as a consultant to the Task Force on Women's Rights and Responsibilities, her advocacy for "responsible feminism" and her role as part of the informal network supporting Barbara Franklin's work in the White House. She reflects extensively on the importance of hiring qualified women, and the barriers and compromises women faced. Dr. Hauser also compares American women's situations to those of women in other countries and reflects on the role conflicts, stereotypes, and lack of self-confidence that still impede women's advancement despite the significant achievements that have been made in opening more doors for women.

Interviewer: Margita White has shared with us a memorandum from her files when she was working for Herb Klein. It was written by you in April 1971 and discussed the emergence of responsible feminism and the need for the administration to recognize women's desire to participate fully and equally in the life of America. You said in one of the quotes I love, "I do not believe you can approach them by what they call 'kitchen talk,'" and urged the appointment of a White House adviser on women's affairs. Do you remember that memo and what actions were taken?

R. Hauser: Well, I didn't know all the actions that were taken. Somehow it got leaked by I don't know who, because there was a picture of me on the front page of the Washington Post one morning with a big headline saying "Call for Women in the Campaign and Women in Government." And they played it up as something very radical. I to this day don' t know how that story got to them, but somebody obviously leaked the memo. You see the sensitivity when I had to say responsible feminism. Because if you just said feminism, the picture that was evoked was the Bella Abzugs standing on the street corners. It was a time of bra burning and all of that. So we wanted to make very clear that that was not what we had in mind.