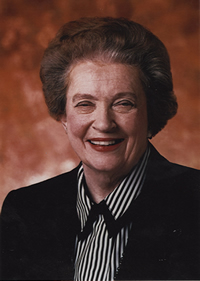 Ruth Davis’ interview describes her work with the Secretary of Defense, the National Library of Medicine, and as Director of the National Center for Biomedical Communications, as well as the Department of Economic Security. As Deputy Director of the National Library of Medicine, she was involved in the development of early computers, and was responsible for the development of computers and communications in the medical world as was mandated to the National Library of Medicine by Congress. She describes her childhood in northwestern Pennsylvania and Maryland, and goes on to elaborate about her education in grade school and as an undergraduate and graduate student. The interview also focuses on Homeland Security and the events of 9/11, as well as her work with data encryption, with agencies such as the CIA, and with her work on several boards after leaving the government. She goes on to discuss Barbara Franklin’s work in President Nixon’s White House and the Executive Women in Government board. Lastly, she talks about her work at Pymatuning and her thoughts on women in the workforce in the late 1960s and early 1970s.