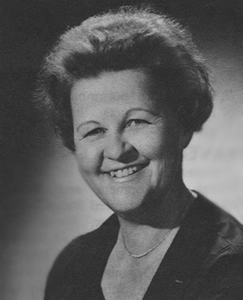 Brereton Sturtevant was a fourth-generation Washingtonian and attended the Holton-Arms School, before matriculating at Wellesley. She received her degree in chemistry in 1942 and then worked as a research chemist for DuPont in Wilmington, Delaware until 1950. She spent her last five years with the company commuting evenings to Philadelphia to earn her law degree. She then became the first woman law clerk for the Delaware Supreme Court, went into private practice and later became a partner in the firm of Connolly, Bove & Lodge, a Wilmington firm specializing in patent law. In 1971, she was appointed by President Nixon as Examiner-in-Chief for the U.S. Patent and Trademark Office Board of Appeals, the first woman to hold such a position. She remained in office through the presidencies of Gerald Ford, Jimmy Carter, and Ronald Reagan, retiring in 1988. She resides in Alexandria, Virginia.

Bret Sturtevant recounts her family life and schooling in Washington, D.C. at Holton-Arms School and then at Wellesley College, where she graduated in 1942. As chemistry major, she was recruited to work for DuPont in Wilmington, Delaware. Women with bachelor’s degrees were later told they’d need Ph.D.’s if they wanted to keep their jobs after the war. She was more interested in law though, and DuPont paid for her to earn a law degree part-time at Temple University. When she completed the degree, however, the DuPont law department wouldn’t hire her for a professional position so she went into private practice and became a patent litigator. In 1971, she was appointed Patent Examiner-in-Chief, the first woman to hold that position on the Board of Patent Appeals and Interferences of the U.S. Patent Office. Sturtevant describes her introduction to Barbara Franklin, and the beginning of their long friendship at that time. She also discusses the origins of Executive Women in Government, begun as a networking opportunity by Barbara Franklin, and also her role as an adjunct professor of law at Georgetown University.

Click HERE to listen to the interview! (Transcript available in html)