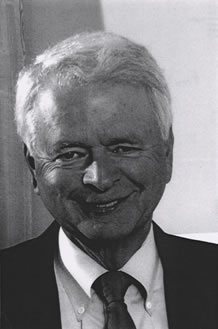 Frank Herringer graduated from Dartmouth University in 1964, and then completed his MBA at the Amos Tuck School of Business Administration at Dartmouth in 1965. He joined the White House staff in 1971, and in 1972 became Staff Assistant to the President after Fred Malek left the White House to become Deputy Director of the Republican Re-election Campaign. Herringer remained on the White House staff through February 1973; during the staff turnover that occurred at this time, he was offered a position at the Urban Mass Transportation Administration (UMTA), and was then asked to run the San Francisco Bay Area Rapid Transit District (BART). He joined Transamerica Corporation in 1979 as Vice President and Assistant to the Chairman. He became Senior Vice President in 1980, Group Vice President in 1982, and Executive Vice President in 1984. In 1991 he became CEO of Transamerica Corporation, which he has chaired since 1995. He became Director of Cardax Pharmaceuticals in 2007.

During his interview, Frank Herringer discussed his work in the White House and in the UMTA and BART, and his observations regarding the hiring of women in executive positions on the White House staff. He begins by describing his education and how he came to be involved in politics and at the White House, as well as his promotion to Staff Assistant to the President. His responsibilities involved staffing the White House and working with Cabinet Secretaries. He describes how, prior to Barbara Franklin’s arrival at the White House, few women were hired for positions; he says that this was not due to discrimination, but rather to the very small percentage of women qualified for these positions, compared to the overwhelming majority of men who applied. He says that employers had to go an extra mile to find a qualified female, and so usually simply accepted a male applicant. He says that women mostly held more intellectual jobs, such as those involving policy or economics; few held executive positions. During his time at the UMTA and BART, legislation such as the National Mass Transportation Assistance Act of 1974 and several Federal-Aid Highway Acts were passed. He closes by saying that many of the women who joined the White House staff while he was employed there went on to become influential politicians and public figures, such as Sally Anne Peyton, Elizabeth Hanford Dole, Diane Sawyer, and Kay Bailey Hutchinson. These women became the sources who “filled the pipeline.”