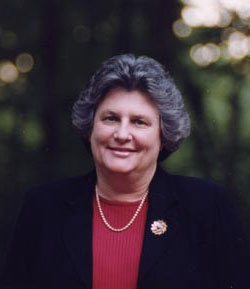 Bobbie Kilberg graduated from Yale Law School in 1969. That same year, she was named a White House Fellow and served first on the staff of the Domestic Policy Council in the Nixon White House and then as a Staff Assistant to the President. From 1971 to 1973 she worked with the Washington law firm of Arnold and Porter, becoming Vice President for Academic Affairs at Mount Vernon College in 1973. She served as Associate Counsel to the President from 1975 to 1976 under President Gerald Ford and joined the Aspen Institute in 1978. She became the Vice President and General Counsel of the Roosevelt Center for American Policy Studies in 1982 and from 1989 to 1992 served President George H. W. Bush as Deputy Assistant to the President for Public Liaison, directing all communications and policy relations between the White House and American interest groups. In late 1992 she became Director of the President’s Office of Intergovernmental Affairs and in 1998 was appointed to serve on the Citizens’ Advisory Committee on Legislative Compensation. Since 2000 she has served on the Joint Judicial Advisory Committee of the Virginia General Assembly. She currently serves on the Attorney General of Virginia’s Identity Theft Task Force and is a member of the Committee of 100 of the U. S. Chamber of Commerce.