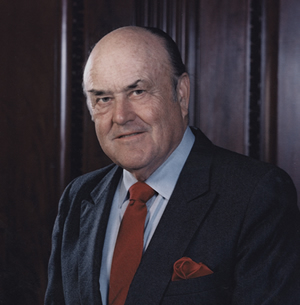 Melvin R. Laird chaired the Wisconsin Legislative Council and served in the U. S. Navy from 1942 to 1946 in the Pacific Fleet with Task Forces 38 and 58. He was a member of the Wisconsin Senate from 1946 to 1952, and then served nine terms in the U. S. Congress (1952-1969) where he chaired the Republican House Minority. He served as Secretary of Defense from 1968 to 1973 and as Counselor to the President for Domestic Affairs from 1973 to 1974. Today he serves as Senior Counselor for National and International Affairs to the Reader’s Digest Association, Inc. He has served on numerous Boards of Directors, including the American Express/IDS Mutual Funds Group and the Communications Satellite Corporation (which he chaired from 1992-1996), among others. He has also been active in numerous nonprofit organizations such as the American Academy of Diplomacy, the John F. Kennedy Center for the Performing Arts, and the George Washington University, among others. He received the Presidential Medal of Freedom in 1974 and is a member of the Order of the Purple Heart.

In the beginning of his interview, Melvin Laird asks the interviewer if she remembers where she was on the day President Gerald Ford pardoned President Richard Nixon. He then goes on to describe his childhood and his family’s role in Wisconsin politics. He describes running and being elected to serve his father’s remaining two years in his Wisconsin Senate term in 1946. He was elected to the U. S. Congress at the age of 23, two years below the required age of 25, and during his nine terms became Chairman of the House Republican Conference and of the Republican Platform Committee. He also discusses his work with Senator John Fogarty of Rhode Island on various other committees, as well as at the Department of Defense. He describes his appointment as Counselor to President Nixon in 1973 after the eruption of the Watergate scandal and his work with Bryce Harlow in getting women into top positions. He closes by discussing his work with various nonprofit groups and his interactions with the press.