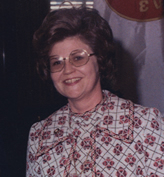 Judy Cole joined the staff of the Political Director of the Republican National Committee during the 1964 presidential campaign, and from 1965 to mid-1967, served as legislative assistant to members of the U. S. House of Representatives. She joined the staff of the Nixon for President Committee national headquarters in Washington, D. C. in 1967 as chief administrative officer, and after the 1968 Republican National Convention became a member of the traveling campaign staff of Vice Presidential candidate Spiro Agnew. After Nixon’s election she joined the White House staff as secretary to the President’s Political Advisor. After leaving the White House to pursue graduate studies at the University of Missouri-Kansas City, she returned in 1974, this time as staff assistant to the President in the Office of Personnel, where she identified and recruited qualified women for presidential appointments. That same year she accepted the position of staff assistant to the Director of the Arms Control Disarmament Agency. Later in 1974, she moved to the National Aeronautics and Space Administration (NASA) as Deputy Assistant Administrator for Legislative Affairs and was there awarded the NASA Exceptional Service medal. While in law school she returned to the White House again as a writer in the Office of Presidential Communications, and completed an internship at the Federal Trade Commission, where she served the remainder of her government career in the Mergers II section.