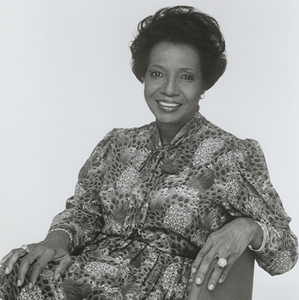 Gloria Toote graduated from Howard University Law School in 1951 and Columbia University Law School in 1956. She went on to work at the law firm of Greenbaum, Wolff, and Ernst in 1957 and from 1957 to 1958 was a member of the Time magazine editorial staff. She served as assistant general counsel on the New York State Workmen’s Compensation Board (1958- circa 1962), as president of the Toote Town Publishing Company and Town Sound Studios (1966-1970), and as assistant director of the Action Agency (1971-1973). From 1973 to 1975 she served as Assistant Secretary of the U. S. Department of Housing and Urban Development. She was vice chairman of the President’s Advisory Council on Private Sector Initiatives from 1983 to 1985. She has served on numerous Boards of Directors, including Citizens for the Republic, National Black United Fund, and Federal Executive Women in Government. From 1984 to 1992 she served as vice chair of the National Political Congress of Black Women, and was a member of the Republican National Committee’s Council of Economic Affairs, as well as serving as president of the New York City Black Republican Council.