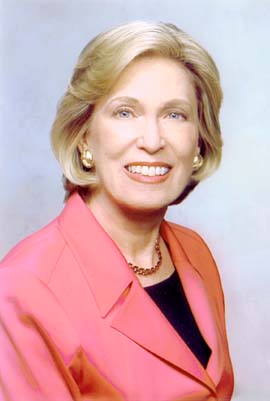 Barbara Franklin's role in the Nixon White House from 1971 to 1973 is the keystone for advancing women into leadership positions in government and also for this oral history project. After graduation from Penn State in 1962, she became one of the first women to receive an M.B.A. degree from the Harvard Business School in 1964.  After working as Assistant Vice President at Citibank, she accepted a position as Staff Assistant to President Richard M. Nixon in 1971 with the mission to recruit talented women into leadership positions in the federal government. After great success she was nominated and confirmed as Commissioner and Vice Chairman of the newly established Consumer Product Safety Commission in 1973. After six years of service, she returned to business, founding a consulting firm and becoming a director on a number of corporate boards, a senior fellow of the Wharton School, and director of the Wharton Government and Business Program at the University of Pennsylvania, and at various times as a member of the President's Advisory Committee for Trade Policy Negotiations, as a U.S. delegate to the United Nations General Assembly. In 1992-93, she served as the 29th Secretary of Commerce in the administration of President George H. W. Bush. Returning to the private sector, she is now President and Chief Executive Officer of Barbara Franklin Enterprises, a private consulting firm. She is the recipient of numerous awards and honorary degrees, and the Distinguished Alumni award from Penn State.

Ranging from the influences of her parents and experiences in college and M.B.A. program, Barbara Franklin's interview covers her career in considerable depth in business, the White House, the Consumer Product Safety Commission, her return to the business world, and service as Secretary of Commerce. Through these experiences we can follow her evolving ideas and the development and success of the program to recruit women into leadership and middle management positions in the federal government. Equally interesting are her reflections on the problems women faced in this effort, the largely overlooked successful effort to advance women's equality initiated by the Nixon Administration, and the impact of this effort on the women's movement in America. Many of the other women interviewed in this project are mentioned here and placed in context.

Click HERE to listen to the interview! (transcript available in html)