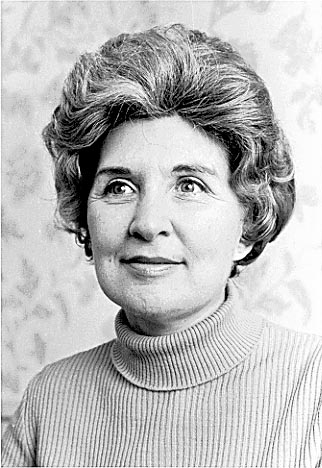 A Washington correspondent and bureau chief since 1963, Vera Glaser has written for the North American Newspaper Alliance, Knight Ridder Newspapers, Maturity News Service, and most recently has been contributing editor for The Washingtonian magazine. She has been a freelance writer for a variety of magazines and a commentator on radio and television. In 1970, she served as a member of President Nixon’s Task Force on Women’s Rights and Responsibilities and has served as a public member of a variety of USIA and Department of State advisory panels. She has been president of the Washington Press Club, a governor of the National Press Club, and a member of the board of the International Women’s Media Foundation.

Vera Glaser posed a question to a newly elected President Nixon in a February 1969 news conference that was the catalyst for the A Few Good Women project. She asked the president why he had made so few appointments of women to top-level positions. Taken by surprise, he immediately responded he would change this and so began the first systematic program to recruit women in executive positions in the federal government. Her interview further describes the recruitment of women into government, the work and recommendations of the Task Force, the Equal Rights Amendment campaign, and media coverage of women issues as well as issues of women in journalism.

First, I should say that because it was only Nixon's second new conference as President, some reporters were going a little easy on him. He had inspired a great deal of astonishment and respect by making this political comeback in 1968. But I've noticed that sometimes reporters, when a President is new, may not put forward as tough questions to him. I thought they were giving easy questions to President Nixon. I had about seven questions in mind that he could be asked. One was the question about women. When he recognized me, I had to decide quickly what I was going to ask him. It was the one about women which went pretty much like this: (We can check the record.)

"Mr. President, since you've been inaugurated, you have made approximately 200 presidential appointments, and only three of them have gone to women. Can we expect some more equitable recognition of women's abilities, or are we going to remain the lost sex?"

Well, you know, there were some chuckles because it was quote/unquote a women's question. At that time, when the famous journalist May Craig would question the President, some of the men would laugh at her. And so there were a few giggles at mine.

Well, the President kind of smiled and leaned back. He said, "Would you care to come into the Administration?" Frankly, I thought that was a little snide. But he must have realized, "I'm on television with 50 million people watching," and he turned quite serious. "Well, you know," he said, "I really wasn't aware of that. We will do something as soon as possible." I took that as the kind of empty promise a politician might make. But indeed he did get going. He was the first President to give a lot of attention to it.

Listen to the full interview.(HTML transcript).