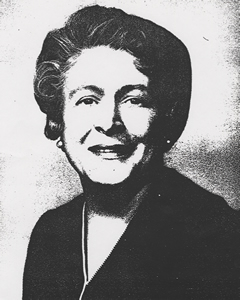 Born in Brooklyn, N.Y. in 1910, Esther Lawton's family realized from an early age that she had academic talent and supported her education through college at a time when relatively few women could take that route. She graduated from the University of Rochester in 1932 and, with her husband, took the Civil Service examination for a government position. She was called to Washington in June 1936, and began working in the Treasury Department, first in public relations, and then coordinating foreign intelligence reporting before the creation of the Office of Strategic Services. In 1942, she began work as a position classifier, the field where she would make extraordinary contributions over the next 38 years. She rose gradually, becoming Assistant Director in 1961 and Deputy Director of Personnel for the Treasury Department in 1972, then the highest ranking woman in the department. Esther Lawton was an extraordinary teacher and organizational leader. In 1961, she was the first woman elected president of the American Society for Public Administration. She founded the Training Officers' Conference, the Classification and Compensation Society, and the International Association for Personnel Women, as well as a number of women's organizations. During these years, Lawton also served as a consultant for the Ford Foundation in Lebanon and Jordan, advising those governments on personnel management, occupational classification, and salary scale determination. During the 1970s, Lawton was instrumental in developing lists of women qualified for supergrade positions and she worked closely with Barbara Franklin. Widely known as probably the best classification analyst in the federal government, Lawton received numerous awards including the 1969 Federal Woman's Award and was twice named Professional Woman of the Year by Washington's Business and Professional Women's Clubs. She retired from the federal government in 1980 and opened her own management consulting firm as well as teaching at George Washington University's School of Government and Business Administration.

This interview with 88-year-old Esther Lawton also included her niece Dr. Diane Christian, Director of the Center for Studies in American Culture at SUNY Buffalo. In it Lawton reflects on her methods of dealing with people to achieve success through her career at the Treasury Department and as a consultant for the Ford Foundation. She recalls her strong interest in anything having to do with the advancement of women, while at the same time having to adapt to a strategy of gradualism and indirect suggestions to advance her own ideas and position. She discusses the discrimination she experienced in trying to advance and be promoted in the Treasury Department. Christian adds her own commentary on how her aunt influenced her life and what she has learned about it from her aunt's papers and speeches.