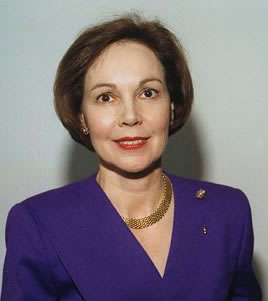 Julie Nixon was born in 1948 in Washington, D.C. She graduated from Smith College in 1970 and received a master's degree in Elementary Education from Catholic University in 1971. She was active in both of her father's presidential campaigns and during the Nixon administration, she traveled across the country, representing the White House on behalf of children's issues, the environment, and the elderly. She married David Eisenhower on December 28, 1968. From 1973-75, Nixon Eisenhower served as Assistant Managing Editor of the Saturday Evening Post, and helped establish a book division for Curtis Publishing Co., its parent corporation. Since that time, she has written or edited five books, including Pat Nixon: The Untold Story, a biography of her mother. She has an extensive record of community service in the Philadelphia area and is co-chair of the Richard Nixon Presidential Library and Birthplace Foundation.

Julie Nixon Eisenhower's interview provides her perceptions of her father's attitudes toward the emerging feminist movement and the project to appoint more women to leadership positions in his administration. She also gives insights into her mother's role and how Pat Nixon encouraged these ideas through conversations with her husband, suggestions, and advocacy for issues ranging from having women military aides and secret service agents in the White House, to support for the Equal Rights Amendment and the appointment of a woman justice to the Supreme Court. She also reflects on her own interest in and support for these issues as a college student and newly-married young woman seeking to have a career as well as a family of her own. She places her father's comments from the released White House tapes on women and African-Americans in context, by noting their selection to prove a particular bias.