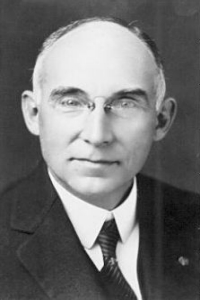 The Challenge: The post-war years of growth kept the College's need of income chronically in excess of state appropriations and other revenue. During the Sparks-Thomas interregnum, the trustees had allocated substantial sums for salary increases, but the faculty was still underpaid and overworked. The need for additional campus buildings was critical. The basic problem was, therefore, to find enough money to keep pace with the demands the public was now making on the College.

a) The Thomas solution to the money problem was stated explicitly to the large and distinguished audience at his inaugural. It was time, he said, for Pennsylvania's land-grant college to become The Pennsylvania State University, capstone of the public school system, with a campus enrollment of 10,000 students and with affiliated professional and technical schools located throughout the Commonwealth. The state government could easily finance such an enterprise if it made Penn State, a state institution, the sole recipient of public funds for higher learning instead of also aiding private institutions. (As was to be expected, the private college presidents in his audience failed to see the merit of this proposal and, therefore, consistently suspected and opposed his budget requests through their own legislative representatives.) His troubles were compounded when the Supreme Court of Pennsylvania ruled that his proposal for a constitutional amendment authorizing a state bond issue for building funds could not be submitted to the voters for four years. He also had to face economy-minded Governor Gifford Pinchot. The consequence was that his biennial state appropriations literally declined rather than increased. (Ironically, it was during this period that, in several historic opinions, the attorney general defined the status of the College as a state institution more clearly than it had ever been done before.)

b) Emergency Building Fund Campaign. Desperate for building space, Thomas secured the trustees' approval to involve alumni, staff and students in an organized public solicitation for funds. The goal was $2 million; when the campaign was closed, net receipts were less than $1.2 million. Nonetheless, this effort did produce all or part of the money used to construct residence halls (Grange, Varsity, etc.), the infirmary and recreation building. It also publicized the needs of the College and gave alumni and friends an opportunity to give it tangible support.

c) Curricular changes followed in general the Atherton philosophy of constantly broadening educational services for the people of the Commonwealth. When the Legislature enacted drastic changes in the state's educational system, Thomas organized (1921) the Department of Teacher Training Extension to help public school teachers adapt to their altered professional requirements on an in-service basis. Two years later he established the School of Education for campus training of new teachers. In 1922, the Graduate School was created and, two years later, the trustees approved the faculty Senate's recommendation that the College be authorized to award Ph.D. degrees.

d) The Senate was organized in 1921 as the legislative body of the University, composed of administrative and elected faculty representatives. (Faculty Bulletin publication began in 1921.)

In 1923, the trustees supplemented faculty salaries with a specific policy regarding sabbatical leaves, and leaves of absence for graduate work. The ranks of graduate assistant and graduate scholar were created and funded, to provide the faculty with some teaching and research assistance.

e) Enrollment rose slowly from 3,232 to 3,854 students. Lack of classroom, laboratories and living facilities forced continuation of the policy of admitting new students on a scholastic aptitude priority, with the gap between applications and admissions growing steadily wider.

When it became clear that funds commensurate with the needs of the College would not be provided, Thomas resigned to accept the presidency of Rutgers University in 1925. He was later president of Norwich University and died in Vermont in 1952 at the age of 82.