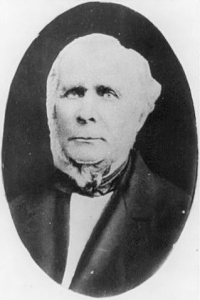 The Person: "Burrowes was well known throughout Pennsylvania, especially in educational circles. Though not a college graduate, he had a good academic education [including a year of law at Yale] and had been admitted to the Lancaster bar, but never practiced law extensively. He became active in state politics...member of House of Representatives 1831-32; chairman of the Anti-Masonic Party; secretary of the Commonwealth and ex officio head of the common school system, 1835-39. Thereafter, he farmed in Lancaster County; founded and published the Pennsylvania School Journal; served as state superintendent of common schools, 1860-63; and as superintendent of the soldiers orphan schools, 1863-68.

He had had no experience in higher education as teacher or administrator before coming to Penn State at the age of 63 [but had led the movement and framed the law, passed in 1857, for the establishment of Pennsylvania's normal schools, which later became the state teachers' colleges and are now the state colleges and university (Indiana)].... He was noted for his genial disposition, ready wit and conversational powers."

The Challenge: To restore public confidence in the college, to recruit more students and to solve the financial crisis.

Burrowes took personal charge of the college farm and of the three experimental farms (which he set up), working in the fields with the students.

b) Raising enrollment. Enrollment rose from 45 to 59 students during his tenure of office.

c) Improving public relations. Burrowes started the annual "Harvest Home reception," an opportunity for the public to inspect the farm, see new farm implements on trial and hear lectures on subjects of practical interest to farmers. This did bring many people to the campus, and led to the first alumni reunions.

d) The financial situation continued to deteriorate, and the trustees were still borrowing money to pay current expenses when Burrowes died in February 1871 of the consequences of exposure during a winter mountain outing with the students.