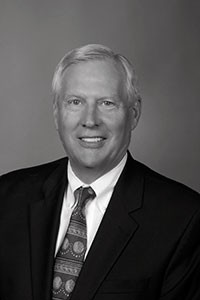 Rodney A. Erickson assumed responsibilities as the 17th President of The Pennsylvania State University on November 9, 2011 and served in this capacity through May 11, 2014. His work has had an unparalleled impact on resident instruction, research, service and the general welfare of our faculty and students. He has worked to improve the academic stature of the University and enhance the success of our students. He has promoted various long-term interests like internationalization and academic excellence.

Previously, Erickson served as Penn State’s executive vice president and provost since July 1, 1999. As provost, he was chief academic officer of the University, responsible for administration of the University’s resident instruction, research and continuing education, and for the general welfare of the faculty and students. As executive vice president, Erickson served as the chief executive officer in the president’s absence and was centrally involved in most aspects of University operations.

Erickson is deeply committed to Penn State and to fulfilling the University’s mission of excellence in education, groundbreaking research, creative activity and service to those in Pennsylvania, the nation and the world. Throughout his career, he has worked at the intersection of academia, business, and government to advance education and create new knowledge to benefit the community at large. He is a highly respected academic leader, and he has chaired numerous task forces and special committees, including the Committee on Institutional Cooperation, which is the academic arm of the Big Ten universities. Erickson is a former Fulbright Research Scholar in the United Kingdom and a Simon Senior Fellow at the University of Manchester. His research has focused on the spatial dimensions of urban and regional economies, international trade, and economic development policies.

Erickson holds B.A. and M.A. degrees from the University of Minnesota, and was awarded a Ph.D. in geography from the University of Washington in 1973. He began his academic career at the University of Wisconsin-Madison before joining the faculty at Penn State in 1977. He was promoted to professor in both geography and business administration in 1984. He was named dean of the Graduate School in July 1995 and, in March 1997, he assumed the additional responsibilities of vice president for research.

Among his other administrative assignments at Penn State, Erickson served as head of the Department of Geography in the College of Earth and Mineral Sciences, and as director of the Center for Regional Business Analysis and associate director of the Division of Research in the Smeal College of Business.

Erickson formerly chaired the meetings of the Academic Leadership Council, which provides advice and counsel to the president on academic matters. He also chaired the Facilities Resources Committee, and was a member of the President’s Council, as well as an ex-officio member of the University Faculty Senate and Senate Council. He has been the leader of many University task forces in recent years, including the Task Force on Tuition, the University Cost Savings Task Force, the University Strategic Planning Council, and the Academic Program and Administrative Services Review Core Council, which was the group charged with identifying $10 million in permanent cost savings and nontuition revenue sources for the University.

President Erickson was named an Honorary Alumnus by the Penn State Alumni Association in 2010 for his contributions to improving the academic stature of the University and enhancing the success of students.