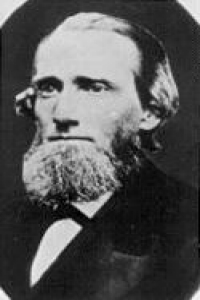 The Person: The Reverend James Calder, D.D., was a native of Harrisburg, a graduate of Wesleyan College, a Methodist missionary in China, then a Methodist minister in the United States until he became president of Hillsdale College (Michigan) in 1859. It was from Hillsdale that he came to Penn State as Burrowes's successor in 1871 at the age of 54. (It is interesting that when he resigned as President in 1880, Calder became a lecturer of the State Grange and editor of The Farmers' Friend. He died in 1893.)

The Challenge: Improve public relations, increase enrollment, get the College on a sound financial basis.

a) Curriculum reform. Calder took the College back up the hill again. Like Fraser, he felt that the Morrill Act envisioned far more than training in agriculture, and set about designing an academic program that grew to be increasingly like that of the orthodox classical institutions. The conventional class system (freshman, sophomore, junior, senior) was reestablished; three courses of study (agricultural, scientific, classical) were offered; the faculty was improved; the compulsory labor rule for students was suspended; the "Harvest Home" receptions became routine field demonstrations of farm implements. These changes "caused divisions among the trustees and the faculty, aroused criticism upon the part of the public and the press, and generated a legislative investigation."

b) Increased enrollment did follow the curriculum changes, reaching a new high of 162 students in 1878. "This increase was due in part to the radical lowering of tuition fees, to increased emphasis on the preparatory department, and to the admission of women." Coming from a coeducational institution and recognizing the obligation of a land-grant college to provide educational opportunity for women, Calder secured approval of the trustees to admit women to the same courses of study as men in 1871. (Six enrolled the first year; by 1879 there were 49 coeds enrolled.)

c) Improved financial position reflected a number of offsetting factors, among them:

The Legislative Act of 1878 appropriated $80,000 to pay off the mortgage set up in Allen's administration, but only on condition that faculty salaries be reduced 10 to 15 percent. This was done, thereby saving the interest on the mortgage ($5,600/year) and reducing salary costs about $1,400 a year.

Tuition charges were abolished except a fee of $20 per year for fuel, light and janitor service, "with the result that the College continued to have difficulty meeting its financial obligations."

d) Name changed to The Pennsylvania State College, January 26, 1874 by order of the Court of Common Pleas of Centre County, on the basis of Calder's argument that "the old name not only failed to express the breadth of purpose contemplated by the laws under which the College received its endowment, but also misled many persons as to its real character."

f) The legislative investigation of 1879 reflected widespread criticism by special interest groups whose members felt the College was mismanaged and was not doing the job which they believed it was created to perform for agriculture. During the spring of 1879, a special legislative committee made a superficial investigation, then issued a critical report, the gist of which was that "the trustees have signally failed to carry out the object for which the magnificent land grant was given...." The chairman of the legislative committee then tried unsuccessfully to pass a resolution denying the College further state support until "the agricultural and mechanical interests of the Commonwealth are receiving from such college actual benefits commensurate with the amount of money expended...."

Calder resigned; the trustees began looking for a new President and preparing for another political attack at the next legislative session.