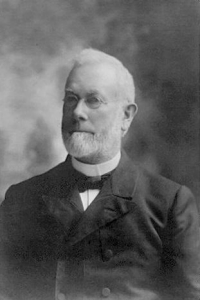 The Person: "Except for his brief adventure of some nine months at Penn State, Shortlidge spent his entire life in secondary education. He had studied a year or two at Yale, but did not graduate. He was principal of Maplewood Institute in Delaware County (Pennsylvania) when he became President of the College...in recognition of which, Yale gave him an honorary master of arts degree in 1880...."

The Achievements: There were few constructive ones. His first presidential duty was to make an address at commencement exercises on July 1, 1880. He did so, and in that one speech managed to offend trustees, faculty, students and the public. He was tactless and blunt in criticizing the trustees and legislators for their inadequacies as compared with efforts made in other states and in Europe. He then "attempted to run the institution as if it were an academy...his arbitrary actions...uncompromising demeanor and overbearing attitude...made him so unpopular on all sides...that he presented his resignation to the trustees in April 1881, to take effect three months later--couched in terms so offensive...that the board accepted it forthwith...."

"The most constructive acts of his administration are found in his bringing to the institution Josiah Jackson as professor of mathematics and W. H. Jordan as professor of agriculture." Jackson was influential in starting the program in mechanic arts and his son, John Price Jackson, became the distinguished (second) dean of engineering. Whitman Jordan, appointed at Professor John Hamilton's suggestion, began systematic experimentation in agriculture and prepared the way for the establishment of the experiment station. (The famous Jordan Soil Fertility Plots were named for him.)

During the tenure of President Shortlidge, but without his support, a faculty committee drafted plans for reorganizing the courses of study as they had been projected by Presidents Pugh and Fraser, and laid the basis from which President Atherton later built. Also, the trustees appointed a committee of their own to investigate the problems and needs of the College, following criticism in the Legislature. "At the memorable called meeting of the Board of Trustees April 8, 1881,...the committee of investigation appointed by the board in January brought in its report; the plan of reorganization of the curriculum was adopted in principle; President Shortlidge resigned; a committee was appointed to nominate a new President...and the executive committee was authorized to memorialize the Legislature to appoint a committee to investigate the affairs of the College."

The trustees promptly appointed vice president James Y. McKee as Acting President. Often such interims are barren holding actions, but the year McKee presided was so eventful, it requires recording.

(It is ironic that Shortlidge has been immortalized by having one of the principal campus roads named for him, whereas Calder--an infinitely more capable person--has to be content with having an alley in the town named for him.)