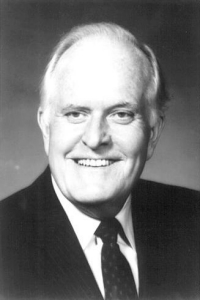 The Person: Bryce Jordan was born in Clovis, New Mexico and raised in Abilene, Texas. After one year at Hardin-Simmons University, he served in the U.S. Army Air Corps from 1942 to 1946. After earning both his bachelor's and master's degrees in music from the University of Texas at Austin, Dr. Jordan taught at Hardin-Simmons from 1949 to 1951. He received his Ph.D. in historical musicology, with a minor in comparative literature, from the University of North Carolina at Chapel Hill in 1956.

He left Kentucky in 1965 to become chairman of the Department of Music at the University of Texas at Austin. He served as vice president for student affairs at Austin from 1968 to 1970, when he was named president ad interim of the campus. A year later, Dr. Jordan assumed the post of president at the University of Texas at Dallas. During his tenure there, U.T. Dallas expanded its faculty from 50 to 215 and increased student enrollment from 40 to more than 7,000. In July of 1981, he became executive vice chancellor and chief operating officer for academic affairs of The University of Texas System. In that role, he had responsibility for the seven general academic units of the System, reporting directly to the Board of Regents. While with the U.T. System, Dr. Jordan served on several national organizations including the Association of the Upper Level Colleges and Universities (of which he was president), the American Association of State Colleges and Universities, the Commission on Colleges of the Southern Association of Colleges and Schools (as a member of the Executive Committee), and the National Commission on Higher Education Issues.

The Challenge: President Jordan's ultimate challenge was to take a University that had reached maturity and propel it toward academic distinction. His avowed goal was to move Penn State toward peer recognition as one of the ten best public universities in the nation. Securing adequate funding for the University was in the forefront of this effort throughout his term.

His other major challenge was to open the University more than ever before to all the citizens of Pennsylvania. Efforts to increase the representation of minorities among the student body, faculty and staff were perhaps the most visible aspect of this challenge. It also required taking the University into more active roles in addressing economic problems and bolstering advanced technological development in both Pennsylvania and the nation.

In order to meet these challenges the University required more flexible planning mechanisms that would create the ability to more rapidly initiate organizational change. The Office of the President was restructured to include a combined position of executive vice president and provost of the University.

a) The Campaign for Penn State was formally launched in 1986 with a goal of $200 million for endowed positions, scholarships, and other programmatic improvements. Within two years this was raised to $300 million and extended another year and that goal was still reached 7 months ahead of schedule. 111 chairs and other endowed faculty positions were created. Ten million dollar gifts from the Eberly Family and from Frank and Mary Jane Smeal were among the many thousands of donations from loyal supporters of Penn State.

b) Operating under a mandate from the federal government to increase the numbers of minority students, the University considerably strengthened its efforts in both recruitment and retention of students, faculty and staff. The University divested its stocks in companies doing business in South Africa and initiated the SHARE program to support higher education in South Africa in response to apartheid. The University continuously worked to improve the environment for minorities at Penn State to combat incidents of racial/ethnic intolerance.

c) A strategic planning program was adopted to tie planning to the budgeting process as a means of implementing strategic decisions. Strategic study groups addressed issues which crossed organizational boundaries. The creation of the Biotechnology Institute, the School of Communications, the College of Health and Human Development, and the Graduate School of Public Policy and Administration result from this process as do efforts to improve the status of women in the University and to strengthen telecommunications. The linkage of budget and planning make this program more successful and more a part of the daily operations of the University than any previous long-range planning effort.

d) President Jordan proposed a "Positive Sum Strategy" for the University to support Economic Development Initiatives in Pennsylvania. The Advanced Technology Center brings funds from the state's Ben Franklin Partnership Program to the University for the cooperative development of new business opportunities. A 130-acre research park was under development on the east campus with a business incubator building constructed and in operation by 1990. The surge in research funding for the University is seen as one means of more actively supporting the potential revitalization of Pennsylvania industry.

e) Penn State is brought into ever closer connections with society on other fronts as well. The increasing development of research centers and institutes with missions to take their findings to society at large ranges from statistical ecology and energy policy to the study of adult literacy and artificial heart developments. Educational partnership programs are developed with several school districts to bring their students and teachers into closer contact with the work of the University. Williamsport Area Community College becomes a subsidiary of the University as the Pennsylvania College of Technology and the King of Prussia Graduate Center moves to a corporate park, becoming Penn State Great Valley.

Text in its entirety is in Appendix C. Details and documents about the act, beginning with its first introduction in Congress in December 1857 and including later legislation and information about the land-grant institutions, are printed in the centennial edition of the State Collection, University Libraries, HVF/Land Grant.

Morrill Act, Section 4. Required offering of military tactics and limiting the act benefits to states in the Union were provisions included because of wartime conditions.

The title page reads A Report upon a Plan for the Organization of Colleges of Agriculture and the Mechanic Arts with Especial Reference to the Organization of The Agricultural College of Pennsylvania, in view of the endowment of this institution by the land scrip fund donated by Congress to the State of Pennsylvania; addressed to the Board of Trustees of the Agricultural College of Pennsylvania, convened at Harrisburg, January 6, 1864; by Dr. E. Pugh, President of the Faculty. Printed by order of the Board. Harrisburg, 1864. The Pugh papers are in the Penn State Collection of the University Libraries.

Of interest in this connection is a publication in the Penn State Collection: The Pennsylvania State College: Address, Legislation, and Decrees of the Courts. Paperbound. 58 pp. Harrisburg, 1880. (Filed in HVF/History, General/Publications, 1860-1897, and elsewhere.) Contents include the Legislative Committee report (p. 57), a reply by a committee of the trustees (the Address of the title), the Charter and subsequent legal documents, the Morrill and Pennsylvania Acceptance Act texts, and minutes of the meetings of the state commission to sell the land-grant scrip. See also Dunaway's History, (p. 96).

The Pennsylvania State University: A Century of Service to the Commonwealth, 1855-1955-- pages not numbered (referred to as the illustrated centennial brochure).