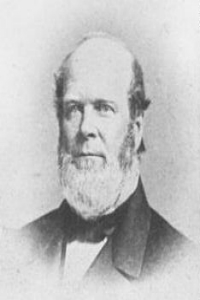 The Person: "Allen, a graduate of Bowdoin College, had served for 10 years as a professor of chemistry and natural history at Dickinson College, and for one year as president of that institution. In 1850 he became president of Girard College...served [there] for 12 years...retiring to his country home in 1863...[from whence he came to Penn State]. In 1852, Union College [gave him an] LL.D. degree.... [When he left Penn State in 1866] he was reelected president of Girard...which position he retained until his death in 1882.... In 1872, he was chosen president of the American Bible Society, which office he held for 8 years.... Allen was a man of character and culture...popular with [Penn State's] faculty and students [but] he could not adjust to the primitive campus conditions...[throughout his short tenure] he appears to have been an interested spectator rather than a leader."

The Challenge: When Dr. Allen arrived, the College was in financial distress ($50,000 in debt); it was still "not secure in its possession of exclusive right to the income from the sale of the land scrip;" and Pugh's curricular programs needed implementation -- which required more money. His first and major job was fundraising.

a) The land scrip problem. Pennsylvania's share of the land scrip distributed under the terms of the Morrill Act was 780,000 acres. Three state commissioners were appointed in 1863 to dispose of the scrip. This commission did not meet until the summer of 1864, when it appointed Allen its agent. Meanwhile, other Pennsylvania colleges were lobbying energetically for a share of the proceeds, and urging delay in the sale of the land scrip until redistribution had been agreed to. Penn State's trustees spearheaded a campaign that defeated a redistribution bill in 1865 and, a year later (April 11, 1866), got enacted a supplement to the state's land-grant act of 1863 which did two things:

Confirmed Penn State's right to land-grant funds. However, the competing colleges managed to amend the new act to read that no more than one-third of the scrip could be sold at that time.

This put Penn State in such dire financial straits that the 1866 act also authorized the trustees to borrow $80,000 to pay the College's debts. (Mortgage bonds for $80,000 were promptly issued, with $56,500 used to pay debts, and the balance set up as a working fund.)

b) Curriculum reorganization. To meet the terms of the land-grant act, the trustees authorized Allen to begin instruction in military tactics. To do this, in July 1865, he hired Professor John Fraser of Jefferson College, a Civil War veteran, as professor of mathematics and astronomy and lecturer on military tactics. Fraser was full of ideas about higher education. One of them was that Pugh's curricula should be implemented and expanded at once. At a faculty meeting in May 1866, he got his colleagues to send a resolution to the trustees declaring that "the entire educational policy of the institution has failed and cannot but fail to satisfy the expectations of the enlightened friends of education." The trustees invited a faculty committee headed by Fraser to blueprint what ought to be done. Fraser wrote the report. As we shall see, the proposals were comprehensive--and expensive. But on the basis of the 1866 loan and the prospect of getting all of the land-grant money in 1867, the trustees approved the proposed reorganization in September 1866. President Allen watched these developments from the sidelines and submitted his resignation at the close of the same meeting of the board, to be effective November 1. To take his place, the trustees promptly elected Fraser, who was then 43 years of age.