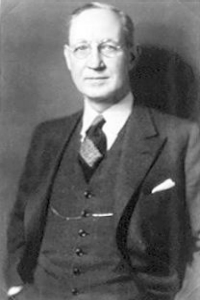 The Person: Hetzel, a native of Wisconsin, earned his A.B. and LL.B. degrees at the University of Wisconsin. He then spent 12 years with Oregon State College, first as a teacher of English and political science, later as director of its extension division. In 1916 he became president of the University of New Hampshire, and is credited with converting it from an A and M college into a state university. He left New Hampshire to become Penn State's tenth President in December 1926 at the age of 44.

The Challenge: Hetzel faced essentially the same problems as his immediate predecessors--an expanding demand for instructional and research programs that consistently exceeded available facilities and operating funds and for greater recognition of the College as a public institution, obligated to respond to the needs of the people, with a corresponding obligation of the state to provide support for its development.

a) The money problem. One of Hetzel's first official duties was to petition the governor for enough state money to make up the deficits in the "Emergency Building Fund." He got it, and vowed that henceforth Penn State would make no commitments without the necessary funds. By temperament a zealous but prudent man, he profited from Thomas's mistakes and, at his modest inauguration, made no drastic proposals for change. Yet, during his administration, he more than doubled the physical plant, piloted the institution through an unprecedented depression and war, almost doubled enrollment and significantly expanded the research program. He did get a few breaks. By 1927, the country was prosperous and "economy-minded" governors were being succeeded by men able and willing to invest in the Commonwealth's future. The first of these (Governor Fisher) had been a trustee of the College, knew its problems and function, and did everything possible to foster its growth. And the College had grown in stature and public esteem. Nonetheless, Hetzel's lifelong contact with land-grant institutions had given him the insights necessary to move effectively through the political labyrinths, to reduce the academic antagonisms Thomas had generated, and to strengthen governmental commitments to the institution.

He did lose one financial battle--through no fault of his own. Thomas's proposal for a constitutional revision to permit an $8 million bond issue for new buildings at Penn State was placed before the voters in 1928--along with four other similar borrowing proposals. All five lost, Penn State's by the narrowest margin, but again public interest and legislative support were strengthened through the well-publicized effort. Its near victory was seen as a mandate for larger appropriations. At the end of the Hetzel era, demands for Penn State's services still exceeded its resources, but it was in sound financial condition, with the state government committed to help it do more and better things.

b) Curricular changes. Hetzel shared the Atherton-Sparks-Thomas view that the land-grant college should endeavor to meet the higher educational needs of Pennsylvanians everywhere. However, in his inaugural address he pointed out that these needs were changing in ways which called for greater development of scientific studies, increased emphasis on research, and a wider dissemination of information among the people through extension services. As the capstone of public education, the College should work closely with the secondary schools of the state.

A faculty-staff committee was appointed to assess the current worth of existing courses and curricula. Each school in the College was required to make a searching self-appraisal and propose changes. At the end of two years, nine curricula and about 70 courses had been dropped, and a few new ones had been established "not upon institutional ambition but upon educational need." In time (1934) a lower division was created to provide a common curriculum for freshmen and sophomores in the schools of Education and the Liberal Arts. Hetzel's long experience in extension work in Oregon had convinced him of the importance of "taking the College to the people." At Penn State, extension programs and enrollment were expanding rapidly, particularly in urban areas, at the request of business, industry and civic groups. In 1934, most of the College's urban programs were coordinated in a newly created Department of General Extension; at that time, an unsuccessful attempt was made to affiliate agricultural and home economics extension with the rest of the institution's extension activities. A more successful attempt to coordinate resident instruction and the extension services was the creation in 1936 of the "Institute for Local Government," which trained students for service, provided practical administrative training for municipal officers and employees, and initiated research projects. In 1938, the Institute for Public Safety started the first driver training program in the country.

The important relationship between instruction and research, and the research needs of government, business and industry, led Hetzel to emphasize graduate work in every academic department in the College. Instruction still remained the primary commitment for most of the faculty, because of teaching load and lack of research subsidies. The Ordnance Research Laboratory was established when the U.S. Navy Department transferred its underwater research program from Harvard to Penn State in 1945, with Dr. Eric A. Walker as director.

To improve instructional and research effort, stress was placed on raising faculty salaries and providing attractive fringe benefits (including membership in the State Employees' Retirement Association which the Legislature agreed to in 1935).

c) The seventy-fifth anniversary of the College in 1930 was marked by the dedication of Old Main, rebuilt on its original site, as a student union and administration building.

d) The College, in the depression years, had a rugged time. Biennial state appropriations dropped from $6.3 million in 1929 to $3.7 million in 1934, and were many years getting back to the pre-depression level. Enrollment started dropping in 1932, but recovered when the WPA and NYA federal programs began helping students support themselves. By 1936, enrollment had reached a new high. Similarly, the building boom fell off for a few years, but more than recovered momentum when the state's GSA building program was inaugurated in 1937 and reinforced with federal WPA funds. Through the early thirties, vacancies on the faculty were not filled, salaries were lowered, and many research projects were discontinued or postponed. But the College remained solvent, no debts were incurred, and "normal" operations were reestablished by 1936.

One significant product of the depression was the establishment of extension centers at various places in the state, beginning with experimental units at Sayre, Towanda, Bradford and Warren in 1933, and two-year undergraduate centers at Pottsville and Hazleton in 1934. These units were the forerunners of Penn State's Commonwealth Campus system.

e. The College during World War II simply converted to the defense effort and kept going on an accelerated trimester system, in effect from 1942 to 1946. All branches of the armed services sent personnel to the campus for specialized training. Nonetheless, regular resident enrollment dropped from a prewar high of 7,300 students to 3,300 (in 1943-44). Many of the faculty devoted full time to research projects involving the search for new materials essential to the war effort. The extension services mobilized farm workers and trained almost 150,000 persons in 235 Pennsylvania communities for industrial jobs under the aegis of the Federal Engineering Defense Training Program. None of the faculty was dismissed, but, where possible, vacancies were not immediately filled. Salaries were not cut, but teaching loads were increased.

An aftermath of the war was an avalanche of students seeking admission to the College--war veterans to begin or complete interrupted educations under the G.I. Bill, and the regular crop of high school graduates. Enrollment rose from 3,300 in 1944 to 10,600 in 1946. Since available space on campus could not possibly cope with such numbers, a "cooperative freshman program" was initiated that year through which 22 off-campus institutions (5 Penn State centers, 13 state colleges, 4 private colleges) enrolled Penn State's entire freshman class--as "Penn State students" with the privilege of transfer to the main campus as sophomores. Temporary housing and classroom facilities hurriedly were provided on campus in converted barracks and trailers.

Hetzel was struggling with these postwar problems when he died, suddenly, in October 1947 at the age of 64.