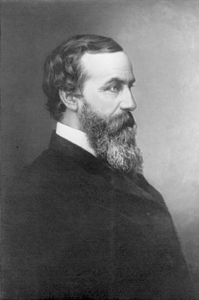 The Person: Fraser, a native of Scotland, had been educated at the University of Aberdeen, "being especially versed in mathematics, Latin and Greek. After teaching some years in Bermuda and in New York, he became professor of mathematics in Jefferson College (Pennsylvania).... He served three years (1862-65) in the Union army, retiring at the close of the war as a brevet brigadier-general." President Allen appointed him a professor of mathematics in July 1865, and "he promptly became an outstanding member of the faculty bent upon promoting a vigorous campaign of reform." (After he left Penn State, Fraser became chancellor of the University of Kansas, then superintendent of public instruction in that state. Then he became professor at the Western University of Pennsylvania, where he died in 1878.)

The Challenge: "...[T]o carry out the intent of the Morrill Act by developing courses in engineering, mining and the liberal arts" in addition to the agricultural curriculum--thereby attracting more students, raising the quality of instruction and placing the institution on a sound financial footing.

a) Curricular reform. Fraser's reorganization "made radical changes in existing courses of study...military drill was substituted for student labor on the farm;...agriculture was to be taught as an experimental science...in the classroom and on the farm;...three 4-year courses of instruction were provided--general science, agriculture and literature; ...courses in mechanical and civil engineering and in mining and metallurgy were planned; ...the faculty was considerably increased in size and only two of the former staff remained; ...the expenses of the students were raised to $260 a year...."

b) The Legislative Act of 1867 finally made the College the sole beneficiary in Pennsylvania of the income from the endowment created by the sale of the land-grant scrip, and authorized the sale of the remaining two-thirds of the scrip--but only on the condition that the College use one-tenth of the endowment to buy and maintain three experimental farms, one on the campus, one in the eastern part of the state, one in the west.

c) The Collapse of Fraser's educational system reflected many factors:

1.  Sale of the land scrip was delayed, and produced less money than anticipated;

2.  Maintenance of the experimental farms was expensive;

4.  Increased faculty salaries and outlays for scientific equipment were based on anticipated enrollment increases; but

Fraser resigned in May 1868. The trustees discontinued the new curricula, reduced the faculty to four members (two of whom subsequently resigned), reduced the tuition charge to $170, and called in Dr. Thomas Burrowes for advice on how to regain public confidence and students.