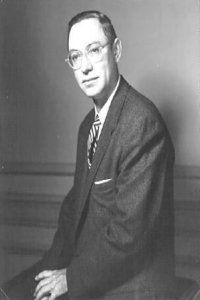 The Person: A native of England, President Walker moved to Canada with his parents at an early age and lived with an aunt in Wrightsville, York County, Pennsylvania, during his high school years. At Harvard University, where he made his own way via scholarship and part-time work, he earned a B.S. in electrical engineering, an M.A. in business administration and an Sc.D. in general science and engineering. Before World War II, he was a professor and head of electrical engineering at Tufts College and the University of Connecticut. He was appointed associate director of the Underwater Sound Laboratory at Harvard early in World War II, where development of the homing torpedo was a principal mission. When a portion of the laboratory was moved to Penn State in 1945 as the Ordnance Research Laboratory, he became laboratory director and head of the Department of Electrical Engineering. He became dean of the College of Engineering and Architecture (1951), vice president for research (1956), then President of the University. He served on many professional, educational and governmental boards and agencies concerned with improving American higher education and applying its resources in the national interest. Upon his retirement from the University in 1970, Dr. Walker served for five years as vice president for science and technology of the Aluminum Company of America.

The Challenge: President Walker correctly sensed that higher education was entering a period of unprecedented growth and development. Penn State must share in this growth--and indeed lead it in the Commonwealth and thus take its place among the nation's distinguished institutions. To do this would require human, physical and financial resources quite beyond anything in the University's experience.

a) President Walker's term of office was marked by rapid growth in all areas -- students, faculty, physical plant and demand for the University's services. Student population increased from 13,000 to 40,000; the Commonwealth Campus system emerged as an integral part of the total University; student numbers at the campuses increased five-fold.

c) Improvements in the quality of the educational programs received major attention during President Walker's tenure. A department-by-department evaluation of the entire academic structure revealed both strengths and weaknesses and laid the basis for much corrective action.

d) Perhaps the highlight of the entire period was the development of The Milton S. Hershey Medical Center, giving the University a College of Medicine through an allocation of $50,000,000 from the M. S. Hershey Foundation in 1963. This was augmented by more than $20,000,000 in construction grants from the U.S. Department of Health, Education and Welfare. Of great significance also was the development of the Capitol Campus at Middletown as an innovative third and fourth year campus and graduate center in the Harrisburg area. Another graduate center was opened at King of Prussia, and the following Commonwealth Campuses were opened: Beaver (1965); Berks (1958); Delaware County (1967); Fayette (1965); New Kensington (1958); and Shenango Valley (1965). Mont Alto, formerly a part of the School of Forest Resources, also became a Commonwealth Campus in 1963.

e) Three new colleges considerably broadened the University's offerings--arts and architecture and human development as well as the College of Medicine.

g) Continuing education services were expanded to reach Pennsylvanians of all ages and became a bulwark for thousands of people seeking to improve their general education, to train for new occupations and professions or to improve their earning power and promotion opportunities in existing jobs. Enrollment grew from 28,000 to 96,000 annually.