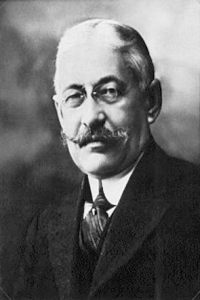 The Person: An Ohio farm boy, born in 1860, Sparks worked his way through Ohio State University as a cub reporter on the Ohio State Journal. After graduation, he was a teacher and principal of public schools in Ohio until 1890, when he came to Penn State as principal of the preparatory department. Five years later he went to the University of Chicago where he obtained a Ph.D. and, in time, became a professor of American history there. A prolific author and speaker, he was active in the development of that University's extension services. This background, and his fine record earlier at Penn State, led the trustees to offer him the presidency. At the age of 48, he became the eighth President on condition that he would have a free hand to develop the institution with the scope and character to meet "the special requirement and aptitude of every young man and woman in the state of Pennsylvania."

The Challenge: Although Atherton had converted Penn State into a broad, vigorous college, many people continued to think of it "as merely an agricultural school...serving a local clientele.... As a public institution dependent upon legislative aid...its progress was conditioned upon...the extent to which it was recognized as performing a useful public function.... The situation required...an engaging personality who could make friends for the College." For this, Sparks was an ideal choice.

a) Curricular changes essential to Sparks's objectives began with expanding the liberal arts as a school and reinforcing the technical and scientific programs. The preparatory department was closed in 1908 to conserve resources needed to provide prelegal and premedical curricula, a department of education and psychology and a curriculum in commerce and finance. In 1910, he established a summer school for teachers, a six-week session offered without tuition charge, "to increase the efficiency of the public school system by the better preparation of its teachers." The correspondence course program was expanded, and the scale of extension instruction enlarged, with the help of a $20,000 earmarked state appropriation in 1913 and with the passage of the Federal Smith-Lever (cooperative extension) Act of 1914. Throughout Sparks's administration, the extension programs were fostered in every way possible. Formal organization of engineering research came with establishment of the experiment station in 1908. The mining experiment station was established in 1919.

b) Improved public relations were, perhaps, Sparks's most important contribution to the growth of the College. He was vastly popular with all kinds of people, and he traveled constantly, "averaging 50 speeches a year throughout his presidency." His relations with the governors and legislators of his era were cordial and effective. The role of alumni was stressed through a series of reunions of the early classes; publications; club organizations; and a "Booster Campaign" in 1915, which was an alumni appeal for more legislative support. "To bring more people to the College...he enlarged the scope of Farmers' Week and arranged for conferences of high school principals on the campus." In 1914, he created a Department of Publicity, answerable directly to him. "Everywhere he went...he built up good will for the College."

c) Increased student enrollment was one of the consequences of Sparks's public relations efforts. During his tenure, resident enrollment for winter sessions tripled (from 1,151 to 3,271); summer session enrollment went up from 146 to 1,045 in 10 years. This rate of growth soon outran the capacity of the new campus buildings Atherton had provided and, in 1913, it became necessary to restrict the number of entering freshmen "by admitting only those applicants with the highest scholarship rating." On this basis, the number of women students rose rapidly. A college examiner and a registrar were appointed to cope with admissions problems.

Characteristically, Sparks was interested in and extremely popular with the students. He fostered expansion of student self-government, installed the honor system in 1915 (it was abolished six years later), appointed the first dean of men and dean of women, and persuaded the faculty to develop a student advisory system.

d) Changing financial problems. Throughout the Sparks era, the state government made increasingly generous appropriations to the College for new buildings and for general operation and maintenance. The pace of the building program set in Atherton's administration was stepped up. But, the growth of enrollment and the demands of an increasingly sophisticated instruction and research program constantly kept fiscal needs ahead of resources. This generated dissatisfaction and resignations among the faculty, who felt that bricks and mortar were taking precedence over salaries. Such problems of growth have persisted to this day.

e) World War I brought a general conversion of the College's instructional and research facilities to the war effort. In 1917, the academic program was accelerated so that commencement could be held in April; in 1918, military personnel established a Students' Army Training Corps (S.A.T.C.) and converted the campus into a modified army camp; conventional student activities virtually ceased; enrollment dropped from 3,728 in 1916 to 3,091 in 1917, then started to climb again, reaching a new high of 4,316 in 1919; state and federal appropriations rose steadily throughout the war. However, the strain of these years undermined Sparks's health. He resigned as President in 1920, staying on as lecturer in American history until his death in 1924 at the age of 64.