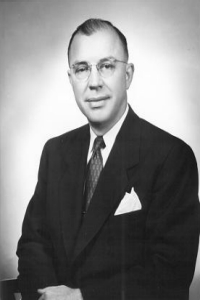 The Person: Eisenhower was born in Kansas, worked his way through Kansas State College and, upon graduation, served for several years as American vice consul in Edinburgh, Scotland. He then accepted an administrative appointment in the U.S. Department of Agriculture where for 16 years he was to be an important influence in the reorganization of that rapidly growing agency. During World War II he was made head of the War Relocation Authority, then set up the Office of War Information. He was with the O.W.I. when in 1943, he became president of his alma mater Kansas State, whence he came to Penn State seven years later at the age of 51. He left Penn State in 1956 to become president of Johns Hopkins University.

The Challenge: To find the funds and facilities needed to meet the demands of spiraling enrollments and rapidly growing research programs, while adjusting the maturing institution to drastically altered postwar conditions and commitments.

a) Curricular changes. Eisenhower's long experience at Kansas State had thoroughly familiarized him with the land-grant philosophy and objectives. By the time he arrived on campus, the comprehensive nature of Penn State's academic commitments had been generally accepted within the Commonwealth. So, he chose to devote his inaugural address not so much to Penn State's status, as to the objectives of its instructional program. Speaking primarily to the students, he asserted that "an abiding commitment to the democratic way of life" was the apex of the five main goals of American higher education, more important than even "specialized training for making a living or a home." The remaining three goals were "an understanding of all the broad fields of knowledge, competence in communication, and ability to make critical judgments." This philosophical concern with the objectives of higher education was to characterize his entire administration.

b) Improved public relations. Equally characteristic was Eisenhower's emphasis on interpersonal relationships. Thus he gave the faculty full recognition as "the backbone of every great institution," sought their counsel through the Faculty Senate and a newly created Faculty Advisory Committee, gave top priority to merit salary increases, and otherwise tried to hold and attract the best academic talent. He listened attentively to the students, organized an annual three-day "student encampment," where "student leaders and faculty representatives met in small group sessions with everyone having his say.... All aspects of student life were discussed, and programs...outlined." During his early years as president of the College, he visited all parts of the Commonwealth, talking with all types of people about Penn State's role in meeting the public's instructional and research needs. He was also effective in raising legislative support of the institution's expanding capital and operating budgets. Alumni and friends of the College were given an opportunity to be more helpful through creation, in 1952 of the Penn State Foundation and the Penn State Alumni Fund, which conducted its first annual solicitation in 1953.

A two-year self-evaluation of all University departments began in 1953 to prepare for an accreditation report by a visiting team of 60 educators, in November 1955, which resulted in reaffirmation of accreditation in May 1956 by Middle States Association of Colleges and Secondary Schools.

Eisenhower's tenure as President of Penn State coincided with his brother's tenure as President of the United States. The publicity attendant on the close working relationship between these two men gave the University national exposure, and diminished the public's traditional inability to distinguish Penn State from the University of Pennsylvania.

c) Expansion of research. As late as a decade before Eisenhower's administration, and primarily because federal research grants were oriented toward agricultural interests, research activity in engineering, mineral industries and sciences received secondary attention. World War II and its aftermath diversified this support and led, among other things, to the construction and fueling of a nuclear reactor building in 1955 for atomic energy research. Meanwhile, in his trips around the state, Eisenhower convinced business and industry to increase private support of both special and general research in behalf of Pennsylvania's economy. By 1956, annual research expenditures were $7.4 million, with over a third of the funds coming from private sources (see section 12).

d) The Pennsylvania State University achieved formal recognition of its status as a university November 14, 1953, by decree of the Centre County Court of Common Pleas. Shortly thereafter, the undergraduate schools were designated as colleges. This ended the inaccurate title of the institution (though not of the town) that had persisted from the beginning.

e) The centennial of the University was marked by a variety of events, beginning with the one hundredth birthday dinner which formally opened the Hetzel Union Building February 22, 1955. Also opened that day was the University Park postal substation, secured after a referendum to change the name of State College borough had been voted down by residents in 1954. All press releases bear the University Park dateline, and the campus mailing address is University Park, 16802.

A United States commemorative postage stamp was issued, jointly honoring the centennials of Penn State and Michigan State as the pioneers in the evolving national system of practical collegiate education to be launched under the Morrill Land-Grant Act of 1862.

Groundbreaking ceremonies were held for the all-faith chapel, which was named for Helen Eakin Eisenhower, the late wife of the Penn State President.

The nuclear reactor building was dedicated, second to be placed on a campus, and inaugurated a program of nuclear science research.