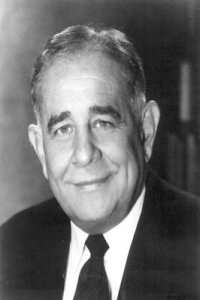 The Person: President Oswald, a native of Minnesota, did his undergraduate work in botany at DePauw University, Greencastle, Indiana. A Phi Beta Kappa scholar, he received his Ph.D. from the University of California in 1942. Following graduation, Dr. Oswald attended Navy Officer Training school at Notre Dame and Northwestern Universities. He served as a PT boat captain in the Mediterranean theater and later as executive officer of the Motor Torpedo Boat Ferrying Command in New Orleans.

In 1946, Dr. Oswald returned to the Davis Campus of the University of California as assistant professor of plant pathology. He became chairman of the department of plant pathology at the Berkeley Campus in 1954 and began concurrent service as an administrative officer in the office of the chancellor in 1958. In 1962 he was named vice president for administration in the statewide system for the University of California.

Dr. Oswald was named president of the University of Kentucky in 1963 where he led the establishment of fifteen branch campuses.

The Challenge: The restoration of stability to the University after a period of national student unrest was one of President Oswald's first tasks at Penn State. In the longer view, the challenge was to develop and implement an academic policy plan to guide the University during the 1970s and 1980s that would continue to stress the ideal of excellence while making the University more available to the citizens of the Commonwealth; and to enhance the reputation and visibility of Penn State in the national and international scene.

a) A new program of governance adopted by the Board of Trustees three weeks prior to Dr. Oswald assuming the presidency of the University outlined a statement of philosophy and general policy which defined the supervisory responsibilities of the president for internal operations establishing lines of accountability to the board. It also delineated the role of faculty and students in internal governance and established the University Council to advise the president. Dr. Oswald was responsible for the implementation of this new program.

b) The Academic Policy Plan (1972) set the stage for a period of modest growth following two decades of dramatic increases in enrollments and in the number of University campuses. The plan established a program review process requiring intensive self-study by academic and administrative units for the purpose of identifying promising new frontiers while examining programs which were reaching diminishing returns. A physical plant development plan to support the academic plans of the University followed.

c) The Milton S. Hershey Medical Center was enhanced during Dr. Oswald's tenure. The first doctor of medicine degrees were conferred in 1971. Five major additions were made to the hospital complex and the Elizabethtown Hospital became an adjunct facility during his administration.