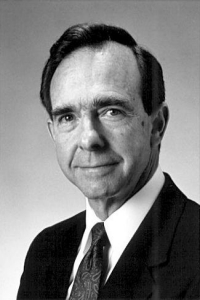 The Person: Born and raised in Alabama, Joab Thomas attended Harvard University where he received his Bachelors (1955), Master's (1957), and Doctoral (1959) Degrees in Biology. He was a teaching fellow from 1955-1959 and a cytotaxonomist at Harvard's Arnold Arboretum from 1959 until 1961. His administrative career began at the University of Alabama in 1964 when he was appointed Assistant Dean in the College of Arts and Sciences. He was later named Dean for Student Development in 1969, and Vice President for Student Affairs in 1974. In 1976, Thomas was appointed Chancellor of North Carolina State University. He returned to Alabama in 1981, serving as President of the University of Alabama-Tuscaloosa campus until 1988. During his tenure as President he served on the Board of Directors for the Tuscaloosa Chamber of Commerce; the Industrial Development Authority of West Alabama; the Alabama Power Co.; Blount, Inc., and the International Service for National Agricultural Research, The Hague, Holland. Following a year long sabbatical in 1989, Joab Thomas was named the 15th President on July 23, 1990 and began his duties on Sept. 1.

The Challenge: Joab Thomas began his presidency with a recognition that while a very successful fundraising campaign had been recently completed, Penn State still faced significant financial difficulties in the near future because of legislative underfunding. Pres. Thomas believed the University would have to begin to focus its energies for excellence more specifically in response to both financial constraints and rising public expectations for the University.

Another outcome of the Campaign for Penn State was the positioning of the University to meet urgent space needs through renovation of some buildings and new construction. New space was needed all across the system to respond to increasing research, libraries, public outreach, and instructional needs.

a) Major steps were taken to strengthen undergraduate education. These included: the creation of a Commission on Undergraduate Education to improve the assessment of student performance; the creation of the Institute for Innovation in Learning to promote the use of active and collaborative learning techniques; the creation of an Office of Undergraduate Fellowships to assist students in obtaining Goldwater, Marshall, and Truman Scholarships and National Science Foundation Fellowships; establishing programs to recognize exceptional teaching and to increase the numbers of students from underrepresented groups in the University.

b) The University Futures Committee was established under Provost John Brighton to reallocate scarce resources to those programs that offered the most promise for academic excellence or had the most potential to meet social needs. The Futures process resulted in the cutting of $30.8 million in University spending and the reallocation of another $22.5 million to new efforts to focus on academic quality.

c) Advancement activities continued to move forward: corporate partnerships with AT&T, Pepsi, and Barnes & Noble, brought many benefits to the University and served as models for similar alliances at other universities. Meanwhile, the level of private giving grew from $61.4 million in 1990-91 to $82.8 million in 1994-95.

d) The largest building program of new construction and renovations in the University's history took place, including (at University Park) the opening of the Research Park and the Penn State Scanticon Conference Center and Hotel, construction of the Agricultural Sciences and Industries Building, the Palmer Museum of Art, the Classroom/Office Building, the Mateer Building, the ARL Building, groundbreaking for the Bryce Jordan Center and authorization of the new Paterno Library. New buildings at other Penn State locations included libraries for five campuses.

e) Penn State accepted membership in the Big 10 athletic conference and became the twelfth member of the CIC -- the Committee on Institutional Cooperation.