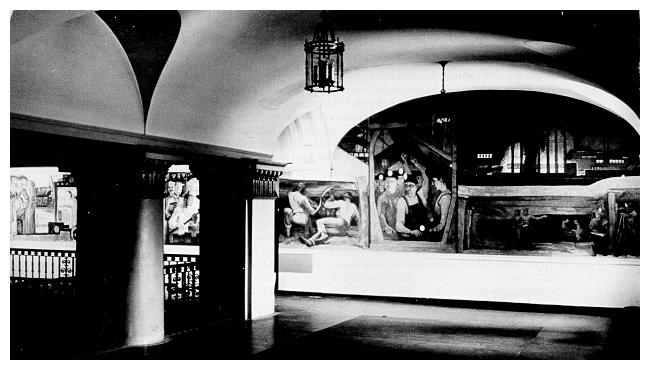 A portion of the newer section, completed in 1949.

One of the largest works of its kind on any campus, the land-grant frescoes grace the upper walls of the lobby in Old Main and pay tribute to the establishment of the University and land-grant education in general. The idea for a mural embodying a pictorial synthesis of Penn State's founding and growth originated in the 1930s with three professors of art and architectural history: Harold E. Dickson, J. Burn Helme, and Francis E. Hyslop. They were inspired in part by the renaissance in mural painting fostered by the federal government's Works Progress Administration. Aided by a substantial contribution from the class of 1932, the three faculty members secured the services of artist Henry varnum Poor, creator of several murals for public buildings in Washington and widely acknowledged master of the fresco medium. The professors received permission from the board of trustees to locate the mural on the north wall above the staircase in the lobby of Old Main.

Poor began making sketches in September 1939 and in April of the following year commenced the actual painting. He worked in true fresco, that is, he painted directly on the wet plaster that was freshly applied (by his daughter Anne) each morning. The pigment thus became part of the wall itself, enhancing the mural's permanency. Poor completed the job on June 18, 1940, and within the year his creation was winning acclaim among artists and critics nationwide.

(Left) Anne Poor, an artist in her own right, applies plaster, which her father will paint while it is still wet to insure that paint and plaster will form a permanent bond; (right) Henry Varnum Poor at work.

The muralist had dramatized the early years of Penn State with extreme sensitivity. He portrayed symbolically the University's activities in engineering, mineral industries, and agriculture around heroically scaled likenesses of Abraham Lincoln and a young student planting a tree. Poor's use of light and dark and the expressiveness lie gave to his figures are only two of the fresco's most memorable features.

In December 1941, the senior, junior, and sophomore classes voted to allot finds for a continuation of the mural along the east and west walls, but plans had to be held in abeyance until after World War II. Students then raised enough money to re-engage Poor, who in November 1948 returned to Old Main to undertake additional frescoes on either side of the original. Completed in June 1949, the newer portions symbolized Penn State's post-war academic and extracurricular activities and services to the Commonwealth. To span the chronological gap between old and new, Poor inserted a cluster of ten figures, from James Irvin to Ralph Hetzel, who had helped to shape the institution's development.

The entire mural covers more than 1,300 square feet. It endows the University with a unique and priceless work of art as well as a depiction of its history for the contemplation of generations to come. 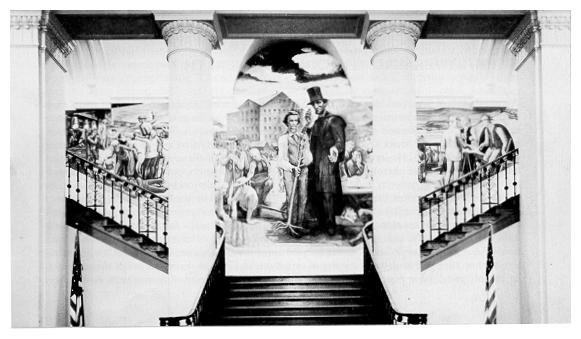 Original section of the fresco