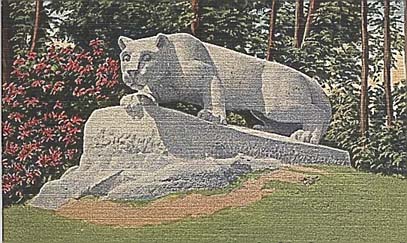 The athletic symbol of the Pennsylvania State University is the North American felis concolor, variously known as the mountain lion, cougar, puma, or panther. The large tawny-colored "cat" became extinct in this region a quarter of a century after the University was founded in 1855.

Penn State is located in the broad Nittany Valley near Mount Nittany, terminal point of a range also called Nittany — a name said to be derived from Indian words meaning a protective barrier against the elements. While the name itself can be seen on W. Scull's map of Pennsylvania, dated 1770, in approximately the correct place, regional folklore connects the name Nittany or Nita-Nee with two Indian maidens. The mythological Nita-Nee was a princess whose people reveres her for leading them into the fertile central Pennsylvania valley, safe from enemy tribes. When she died, the mountain miraculously arose overnight at the burial site, and the name thus was given to the geographical landmarks.

Nita-Nee became a favored name for Indian girls, one of whom figures in another popular legend. She fell in love with a white trader who was forced to flee by her seven brothers. They drove him into a nearby cavern (Penn's Cave), where he died, crying out for his lost Nita-Nee. We now recognize that the legends of the Indian maidens were the invention of author and publisher Henry W. Shoemaker, the story of Nita-Nee and her lover Malachi Boyer, first appeared in print in 1903. Shoemaker then attributed the tale to "an aged Seneca Indian named Isaac Steele." He later admitted the various Indian names were "purely fictitious."

Adoption of the Nittany Lion as Penn State's athletic symbol was an idea of Harrison D. "Joe" Mason '07. At Princeton in 1904, he and other members of Penn State's varsity baseball team were shown two Bengal tigers as an indication of the merciless treatment they would encounter in the game. Mason replied with an instant fabrication of the Penn State Nittany Mountain Lion - king of the beasts - who would overcome even the Tiger. The team defeated Princeton and Mason persevered with his idea.

Confusion with the African Lion is was common until the symbol was officially adopted when the class of 1940 presented its gift of a sculptured Nittany mountain lion in 1942. The work of noted sculptor Heinz Warneke, the crouching powerful figure is now the popular Nittany Lion Shrine, located at Penn State's University Park campus on a grassy mound amid tall trees near Recreation Building.