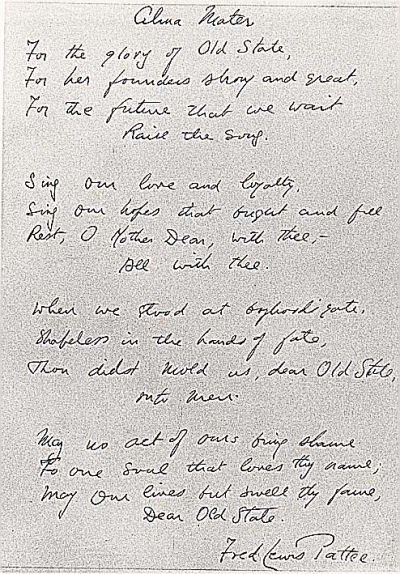 Penn State's Alma Mater was written by Fred Lewis Pattee, longtime Professor of American Literature at the institution. Pattee bemoaned the fact that Penn State had no college song which would nourish college spirit and loyalty as other schools had.

He composed lyrics and published them in April 1901 Free Lance as a suggestion, inviting others to submit their own ideas. His words would be sung to the hymn "Lead Me On," (page 316 of the College Hymnal) by Cauviere, which was sung by graduating classes at Commencement. He felt it was particularly appropriate as both a school favorite and a spirited song, well suited for male voices.

The song was first sung at the Alumni Dinner in June 1901 during Commencement Week. Governor Beaver, President of the Board of Trustees, arose immediately and proclaimed it "the official song of Penn State". With President Atherton's agreement, it became so. Pattee's original version had six verses but later two were omitted and the four-verse version is accepted as the Alma Mater.

The issue of standing "at Boyhood's Gate" waiting to be "molded into men" bothered Pattee from the first. Penn State had been coed for thirty years when the song was written but Pattee felt the ethos of the school was so male oriented that the song was appropriate as written. He later had second thoughts. In his posthumously-published autobiography, he realized that the words bothered many and suggested possibly changing "boyhood" to "childhood" and "mold...into men" to a repeat of "Dear old State." In 1975, with Professor Patricia Farrell acting as a spokesperson for many who felt a change long-overdue, the Board of Trustees accepted Pattee's original suggestion in honor of International Women's Year.