Vignette - The Other Side of College Avenue

The Other Side of College Avenue:
the Community of State College

The founders of The Pennsylvania State University literally placed their institution in the middle of nowhere. The acreage donated by James Irvin was primarily farmland most of its trees having been felled over the previous half-century to fuel iron-making operations at centre Furnace (of which Irvin was co-owner). 'Flit, furnace closed in 1858, but many of' its workers obtained employment in the construction of Old Main, thus beginning the mutual dependence between town and gown that has lasted ever since.

A post office was opened in the main building, whose simple address of "Farm School" by 1860 denoted a hamlet of about twenty-five permanent residents and 110 students. The growth of the community paralleled the fortunes of the College. By 1890, the village had barely 200 year-round inhabitants, nearly all of whom relied directly or indirectly upon Penn State and its 200 or so students for their livelihood. As enrollment began to rise rapidly late in the Atherton era, so did the local population. On August 29, 1896, the citizens incorporated their community as the borough of State College, a name that had been its postal address since the Agricultural College had become The Pennsylvania State College in 1874.

The townspeople had incorporated in order to secure better streets and street lighting, an adequate school, improved utilities, and other amenities not then associated with rural living. They were undoubtedly pleased with the first ordinance passed by the borough council, which authorized the Central Pennsylvania Telephone and Supply Company to erect and maintain telephone lines in the community. 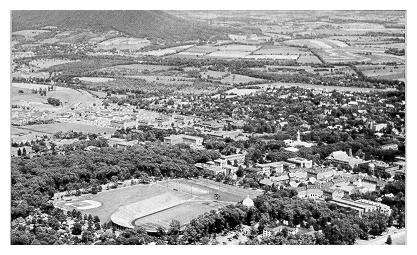 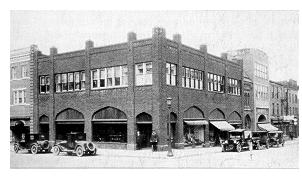 The A-Store, on the corner of College Avenue and South Allen Street, closed in 1971, the same year that Beaver Avenue  was made one-way to take eastbound traffic off College Avenue.

However, another early ordinance-one prohibiting the grazing of cows and horses in borough streets was apparently too "citified" for most residents; after a popular outcry, council repealed it. Nevertheless, the town was fast maturing, as evidenced by the establishment of its first newspaper in 1898 (the State College Times, forerunner of the Centre Daily Times), a Western Union Office in 1902 (previously all telegrams had to be sent and received at Bellefonte), and its first movie theatre in 1909 (the Pastime).

Faculty were the prime movers behind many civic enterprises, including the State College Water Company, the Nittany Light, Heat and Power Company, the Commercial Telephone Company (a rival to the Bell system), and the first bank (1904).

The number of permanent residents kept pace with the number of students as both the borough and the College expanded. In 1930, for example, the borough had a population (excluding students) of about 6,500, while the College recorded an enrollment of about 6,200. Citizens took pride in the neatness and cleanliness of their community, whose well-maintained properties and quiet, tree-lined avenues seemed to represent the epitome of the American college town. To protect the borough from the consequences of disorderly growth, council passed its _first zoning ordinance in 1927 vid several years later authorized the formation of a planning commission. (Even many large cities had not yet taken such measures.)

In the post-World War II era, when Penn State was undergoing tremendous expansion and the borough itself was annexing large tracts of land from adjacent townships to accommodate its own growth, State College remained in spirit if not entirely in fact a small town, its proximity to the increasingly cosmopolitan University notwithstanding. The years following the war also witnessed the development of light industry in what by the 1960s had come to be known as the Centre region (State College and the several surrounding townships). Although such firms as HRB-Singer and Corning Glass provided hundreds of jobs, Penn State was still the area's largest employer and single most important economic force.

By 1980, Centre County's permanent population had surpassed 100,000, qualifying it for designation by the federal government as a Standard Metropolitan Statistical Area. Was this a sure sign that State College and the Centre Region, which accounted for more than half this population, had for better or worse made the transition from small town to bustling city? In a sense, perhaps it was; but there lingered a feeling of insulation, of being cut off from the hurriedness, congestion, noise, and crime of metropolitan living. Not without softie justification did both residents and outsiders refer to State College and Penn State as being located in "Happy Valley."