Vignette - "Equally Inaccessible from All Parts of the State"

The Bellefonte Central Railroad: (left) A BCRR train departs State College, about 1910; (right) Conductor George R. Parker and his "boat" at the BCRR station behind the old Main Engineering Building.

"Equally Inaccessible from All Parts of the State"

The remark above, generally credited to President Edwin Sparks, aptly described transportation to and from Penn State for much of the institution's history. In the early years, persons coming from distant points usually arrived by train at Lewistown or Spruce Creek and faced the prospect of an additional day's ride by stage coach before reaching the College. In 1885, the Pennsylvania Railroad completed its Lewisburg and Tyrone branch, which offered a station stop at Lemont, only two miles from the campus. Seven years later, the Bellefonte Central Railroad reached State College from the county seat, where a connection was made with the PRR.

This hack carried passengers between State College and the Pennsylvania Railroad station at Lemont.

Both the Bellefonte Central and the PRR branch were rail backwaters, with trains that were slow and service that was hardly first class. In addition, travelers between State College and cities such as Pittsburgh or Philadelphia usually had to change trains several times during their journeys. While the greater number of passengers used the PRR to and from Lemont (where yet another change to or from a hack or autobus had to be made), it was the Bellefonte Central that was best remembered. The BCRR's thrice daily service was leisurely even by shortline standards, with in hour and a quarter required to cover eighteen miles of pastoral splendor between State College and Bellefonte Students and faculty had an endless variety of stories to tell about the railroad and its senior conductor, Ross Parker (and the train, once caught in a flash flood, they called "Parker's Boat").

Fred Pattee liked to recount a tale about the trainload of undergraduates anxious to get home for a holiday vacation. "Hey Parker, what are you stopping the train for?" asked one of the more impatient students as the "Boat" came to a halt. "Calves on the track," replied the venerable conductor. "Got to shoo 'em off." A half-hour later, another unscheduled halt was made. "Say Parker, what are we stopping for again?" was the refrain. Said Parker: "Those damn calves have got back on the track again!" 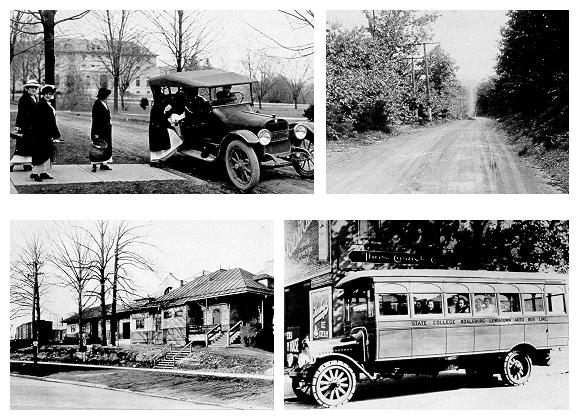 (Top left) Student-owned or -operated autos were becoming more common in town and on campus by the 1920s; (top right) the main road through Seven Mountains to Lewistown, where connections with PRR trains could be made, was still unpaved in 1916; (bottom left) the BCRR station-merely a freight depot by the time this picture was taken in the 1920s—stood on the site later occupied by Hammond Building; (bottom right) probably some of the passengers aboard this bus—owned by the predecessor of the Fullington Auto Bus Company-were students en route to or from the College.

The coming of the automobile spelled the end for railroad service. The Bellefonte Central discontinued regular passenger trains in 1917, although it operated a mixed passenger and freight train until 1945. The Pennsylvania Railroad, through a trackage rights agreement, handled occasional _football and other passenger specials over the BCRR as late as 1964. The Pennsylvania ended passenger service oil its own tracks through Lemont shortly after World War II,

Automobiles and buses became popular means of conveyance fit- students all(] faculty in spite of all extremely poor and circuitous highway network in central Pennsylvania. The first noteworthy improvements came in the early 1930s when a two-lane concrete road (U.S. Route 322) was built through State College as part of a lakes-to-sea highway that spanned the Commonwealth from southeast to northwest Greyhound bus service was introduced at about that same time. The new highway made the Harrisburg and Pittsburgh areas more accessible but was not without its imperfections (as anyone who attempted to negotiate-especially in winter-the infamous hairpin curve in the Seven Mountains between State College and Lewistown would testify). Completion of Interstate 80 across Pennsylvania tit 1970, with ail interchange near Bellefonte, made long-distance highway travel still more satisfactory.

Airlines replaced railroads as the subject of local travelers' tales. Sherm Lutz opened the area's first airport, near Boalsburg, in 1929. He operated a charter service, gave flying lessons, and cooperated with Penn State's aeronautical engineering and civilian pilot training programs. Lutz moved his operations to the new State College Air Depot, just west of the borough, in 1946. Local government leaders considered acquiring the facility and putting in a hard surface runway, and All American Airlines ill 1949 began scheduled flights with the legendary DC-3s. The borough eventually decided against buying or improving the Air Depot, however, and All American (soon to be Allegheny Airlines) ended service in 1951.

Allegheny's planes instead landed at Black Moshannon Airport (renamed Mid-State ill 1963), a state facility twenty miles over winding, narrow roads northwest of State College. That situation remained unchanged well into the 1970s. In the mid-1950s, private operators had constructed a small airport oil land leased from the University just north of State College, but not until Penn State assumed the lease and assets of the airport in 1972 were significant improvements made. More than three-fourths of all passengers using the Mid-State terminal came from the State College-Bellefonte area, and gradually Allegheny shifted its flights to the closer University Park Airport, the development of which was overseen by a public airport authority. In place of the large airliners of the past, however, cattle small commuter aircraft, operating under contract to Allegheny (later USAir) and offering connecting flights to several metropolitan terminals. University Park air travelers also had to cope with the inadequacies of "temporary" terminal facilities. Not until 1985 did the airport have a permanent terminal building. It was a level of service that presented an ironic parallel to that afforded by the railroads-some seventy-five years earlier.