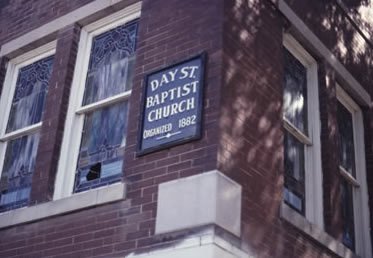 View all items in this subseries.

This segment of the collection derives mainly from institutional records and personal papers filmed under Rabin's supervision in 1975. Johnnie Rebecca Carr (1911-2008) was a founding member of the MIA when it formed in 1955 in response to Rosa Parks's arrest and in support of the ensuing bus boycott. In 1967 Carr became the fifth president of the MIA, following the Reverends Martin Luther King, Ralph Abernathy, Solomon Seay, Sr., and Jesse L. Douglas, all of whom figure in these records. For a listing of contents, see Appendix I.1A in the Finding Aid; the microfilms, and printouts thereof, are available for researchers at the Special Collections Library. Independent of materials obtained from Carr, and illustrated here within the website, are color slides of many Montgomery churches associated with the MIA, color slides of MIA anniversary programs of 1956-1958; and an Alabama Department of Public Safety surveillance tape of speeches by Solomon Seay, Sr., and Ralph Abernathy at the MIA's 8th anniversary meeting on December 5, 1963, together with a transcription of these speeches.

Color slides of Montgomery churches taken by Jack Rabin in 1974.

Surveillance tapes of speeches given at the 8th anniversary meeting of the MIA.