View all items in this subseries.

Audio-visual materials from the march consist of photographs taken in both Selma and Montgomery from March 6 to March 17, 1965, and surveillance audiotapes of the triumphant rally held on the steps of the Alabama State Capitol in Montgomery at the conclusion of the march on March 25, 1965. A substantial number of photographs of this event have been published in conventional sources and on the Internet. Dramatic documentary footage may be seen in part 6 of the film Eyes on the Prize. Nonetheless, the 369 vivid black-and-white photos in the Rabin collection provide numerous unique images of the historic efforts to initiate the Selma-to-Montgomery March. 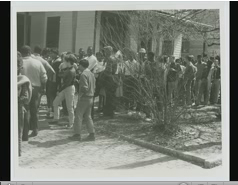 “On March 2 [1965], some 2,000 blacks attended Jimmie Lee Jackson's funeral in Selma, and another 700 attended a separate service in Marion. [Martin Luther] King announced that the march to Montgomery would take place on March 7. On March 6, Governor [George] Wallace forbade the march and ordered state troopers to prevent it. On the same day, Selma came closer to mob violence than it had at any time during the campaign when the Reverend Joseph Ellwanger, a liberal Birmingham Lutheran minister, led a group of sixty white Alabamians in a march to the Dallas County courthouse to show their support for the black cause. . . . Only police intervention at the last minute prevented a furious crowd of 500 whites from attacking the integrationists.” J. Mills Thornton III: Dividing Lines: Municipal Politics and the Struggle for Civil Rights in Montgomery, Birmingham, and Selma (2002), 487.

“It was in this context of extraordinary tension that the march of some 600 blacks stepped off at midday on Sunday, March 7, under the leadership of SNCC's John Lewis [Student Non-violent Coordinating Committee] and SCLC's Hosea Williams [Southern Christian Leadership Conference]. . . . Governor Wallace assured his young admirer Mayor [Joe T.] Smitherman that, though state troopers intended to prevent the march, they would do so calmly and prudently. . . . Just as [Public Safety Director Wilson] Baker expected, the troopers and the posse, once unleashed, turned into an undisciplined mob. . . . Forty canisters of tear gas, twelve canisters of smoke, and eight canisters of nausea gas were used. Amidst the billowing gas, the sixty-five troopers and ten or more sheriff's deputies charged the demonstrators, and the fifteen mounted possemen spurred their horses forward behind the troopers' flying wedge. Making no attempt to arrest the marchers, the officers instead beat the fleeing blacks back toward Selma's black section. There, after thirty minutes of confusion and violence, Baker and his police were finally able to separate the two sides. Fifty-six blacks were hospitalized . . . John Lewis, one of the worst injured, remained in the hospital for two days.” Thornton: Dividing Lines, 487-88.

“Martin Luther King . . . issued a call for sympathetic Americans to join him in Selma to renew the march. At the same time, civil rights lawyers, suing in the name of Hosea Williams, filed a petition in Montgomery federal court for an injunction to bar the state from preventing the demonstration. District Judge Frank Johnson scheduled a hearing on this suit, and in the meantime he issued a temporary restraining order forbidding the march until the hearing could be convened. A vast throng had come to Selma at King's summons, and on March 9, rather than disappoint them, King led twenty-five hundred people across the [Edmund] Pettus Bridge to the point at which the March 7 attack had begun, and then back to the church.” Thornton: Dividing Lines, 488. King, Ralph Abernathy, and Stokely Carmichael are among the marchers.

On this day in Selma, protestors unsuccessfully attempted to march to the Dallas County Courthouse in support of Reverend James Reeb, who had been assaulted the night before. Stopped at the corner of Sylvan Street and Selma Avenue, the marchers held a mass meeting. Reeb died on March 11.

“. . . attorneys for the SCLC had asked Judge Johnson for an injunction to guarantee their right to make such a march. Judge Johnson had begun a hearing on this request on March 11, and while the hearing continued in the Montgomery federal courthouse, the Student Non-violent Coordinating Committee had initiated demonstrations in the city. This entire controversy was extrinsic to the life of the community, but Montgomery authorities in a sense made it their own by insisting on prohibiting any demonstration for which SNCC had failed to obtain a parade permit. SNCC asserted that such an application of the parade permit ordinance rendered it in effect a violation of the First Amendment, and though the organization did obtain permits for some of its marches--marches that police therefore duly guarded--it also staged others without a permit in order to test the city's position.” Thornton: Dividing Lines, 137. There are numerous further images featuring protest signs. Images of clocks on the State Capitol Building and on a Chevrolet billboard confirm that the numbers of prints in the Rabin collection do not conform to a strict chronological order.

These images show a confrontation between protesters (including James Forman) and troopers.

Daily mass meetings continued at the barricade on Sylvan Street.

Following the removal of barricades and a temporarily police blockage on Monday morning, Hosea Williams endeavored to led a march downtown to hold a service for Reeb at the Dallas County Courthouse, but Sheriff Clark reconstituted the police line. The memorial service for Reeb was held instead at Brown Chapel, after which the leaders gained permission to march three abreast to the Dallas County Courthouse. Martin Luther King and Archbishop Iakovos of the Greek Orthodox Church are among the marchers.

“On March 16, the day before Judge Johnson's hearing ended, one of these unpermitted marches, consisting of some 580 demonstrators, about a fourth of whom were out-of-state white college students, was stopped at an intersection three blocks from the capitol. As the demonstrators were standing in the intersection, SNCC's James Forman attempted to lead about eighty of them in an effort to circumvent police lines. The Montgomery County Sheriff's Mounted Posse, a volunteer reserve group composed largely of area cattle ranchers, was ordered to stop the eighty and return them to the main group. Evidently misunderstanding the order, Sheriff Mac Sim Butler and his possemen spurred their quarter horses forward into the group of five hundred demonstrators still standing in the intersection, and the possemen began beating the demonstrators from horseback with clubs, ropes, and canes. At the end of the melee, eight of the demonstrators had to be hospitalized.” Thornton: Dividing Lines, 136-37.

“The next day, March 17--the day on which Judge Johnson issued his injunction authorizing the Selma-to-Montgomery march--Martin Luther King led a massive march of three thousand or more demonstrators to the Montgomery County Courthouse to protest the mounted posse's actions. Sheriff Butler met a delegation of the demonstration's leaders, including both King and James Forman, and personally expressed his deep regrets for the previous day's injuries. The black leaders and white authorities then began intensive negotiations in the sheriff's office that lasted until nearly midnight that night; they produced a comprehensive agreement to govern all future demonstrations in the city.” Thornton: Dividing Lines, 138.

Audio materials include surveillance audiotapes of the triumphant rally held on the steps of the Alabama State Capitol in Montgomery at the conclusion of the march on March 25, 1965. Recordings and transcriptions of Martin Luther King's famous speech are readily available, but the audiotapes in the Rabin collection preserve not only that speech, but the full last two hours of the event on the Capitol steps, with Ralph Abernathy serving as master of ceremonies.

The Subversive Unit audiotapes capture this event in jumbled order. These reel-to-reel surveillance tapes have been transferred to digital files as literal copies and in an "artificial," edited reconstruction of the event in its original sequence. A transcription of the speeches is incomplete, owing to the poor audio quality in some segments, particularly during substantial portions of Shuttlesworth's speech, which is badly distorted, and portions of Park's speech, in which her soft-spoken voice is difficult to hear.