We can't wait to see you! We are working on our reopening plans so we're ready to go when the University deems it safe. Our ongoing priority is to support our users. Visit our Remote Resources page and our COVID-19 page for updates.

About the Book - Times of Sorrow and Hope

In May 2003, the Pennsylvania State University Press published a book entitled Times of Sorrow and Hope: Documenting Everyday Life in Pennsylvania During the Depression and World War II: A Photographic Record,by Allen Cohen and Ronald L. Filippelli, with a Foreword by Miles Orvell. This book, part of the Press’s Keystone Series, features 150 selected images from the approximately 6,000 Pennsylvania photographs. The images cover themes ranging from coal mining, steelworkers, and women in wartime industries to cities and small towns, farm life, family life, and life among the Amish and Mennonites. The book also includes an essay introducing the FSA-OWI project, an introduction to the catalog of the entire collection of Pennsylvania photographs, and a historical essay on Pennsylvania during the Great Depression and World War II.

Allen Cohen is a retired librarian from the University of California, Santa Barbara, a bibliographer, and a film historian whose most recent book is a co-authored work, John Huston: A Guide to References and Resources (1997).

Ronald L. Filippelli is Professor of Labor Studies and Industrial Relations as well as the Associate Dean for Administration and Undergraduate Studies at Penn State. His most recent book is a co-authored work, Cold War in the Working Class: The Rise and Decline of the United Electrical Workers (1995), and he has been a frequent reviewer for The International Journal of the History of Photography. 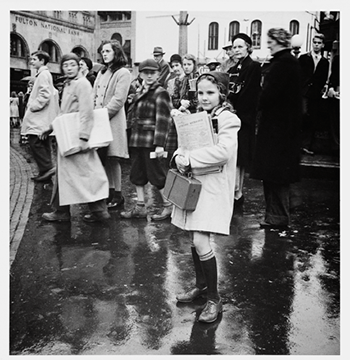 School child waiting for a bus in the rain. Lancaster, November 1942. Marjory Collins. 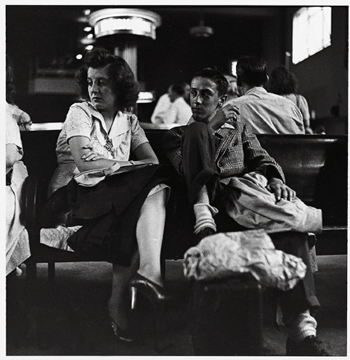 Times of Sorrow and Hope