Introduction to the Times of Sorrow and Hope On-line Catalog 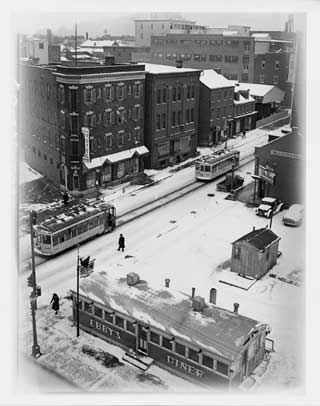 The Times of Sorrow and Hope on-line catalog of Pennsylvania photographs taken by the photographers assigned to the Resettlement Administration (ra, 1935–37), the Farm Security Administration (fsa, 1937–42), the Office of War Information (owi, 1942–43), and related governmental and nongovernmental bodies provides a comprehensive inventory of all the photographs taken in Pennsylvania during those years. (There are some photographs dated before 1935 and some dated after 1943.) When this project began, the Library of Congress—the main depository of the negatives and prints of the photographs—indicated that more than 112,000 images were available digitally on its website. Its fsa-owi collection includes photographs taken throughout the country, not just those from Pennsylvania. The Library of Congress now indicates that there are 160,000 photographs available on its website from a total of 164,000 images in the fsa-owi collection. The collection, then, is still very much in flux.

This sense of flux, however, is not new: for many years, the vast fsa-owi collection has presented challenges to catalogers and researchers alike. When the prints and negatives from the collection were deposited at the Library of Congress in 1944, researchers could only gain access to the images by visiting the Reading Room of the Prints and Photographs Division of the Library of Congress. Roy Stryker, head of the fsa-owi photographic sections, hired Paul Vanderbilt in 1943 to bring some organization to the thousands of prints. Vanderbilt created two major files. First, he arranged the photographs by assignments and called them "lots." These were transferred to 109 reels of microfilm in the 1940s, providing researchers outside the Library of Congress access to about 77,000 of the images. This resource, however, was not well known, and even today very few libraries hold copies of it. Vanderbilt then took the photographs and devised a new subject system, arranging the photographs by subject and by broad geographical area. Prints from the original negatives were mounted on cardboard. Caption information accompanied each item, identifying the photographer, place, date, title, and Library of Congress number. (The Library of Congress number evolved from the numbering system assigned to each photographer as he or she worked in the field.) These mounted prints were placed according to Vanderbilt's subject arrangement in vertical file drawers in the Prints and Photographs Reading Room. From 1978 to 1979, the publisher Chadwyck-Healey transferred the photographs as they appeared in the vertical file drawers to microfiche, a project that reproduced 87,000 photographs on 1,572 fiche. Of this number, 434 fiche contain photographs from the Northeast region, which includes Pennsylvania and twelve other states.

Microfiche, microfilm, and now the Internet have certainly made primary source information more readily available over the years. In addition to the fiche and microfilm editions of the photographs and their on-line counterparts, the written records of the fsa-owi are now available on microfilm as well. These records contain many of the caption lists compiled by the photographers themselves—lists that describe the photographs and indicate which images should be included in the official file and which should not. The photographs not used were designated as "killed" in the caption lists. These so-called killed photographs were not available in the fiche or microfilm editions of the fsa-owi collection, but as the negatives were never destroyed, digital images of them now appear on the Library of Congress website (and for the most part, they are classified as "untitled"). In the present on-line catalog of Pennsylvania photographs, an attempt has been made to bring together the titled photographs and their equivalent untitled or killed images. Appropriate notes are provided when necessary.

After the Library of Congress information, the Times of Sorrow and Hope on-line catalog provides other locations for the images, including fiche and microfilm editions, the New York Public Library collection, and the like, including reproductions in printed books. (In many cases, the photograph titles used in books do not match titles on the Library of Congress website or in the fiche or microfilm editions, and the notes discuss such discrepancies.) When digital images are not available on the Library of Congress website but may be available from other sources, this is also indicated. For instance, Chadwyck-Healey put the Roy Stryker Papers from the University of Louisville—including duplicate fsa-owi photographs in his private collection—on microfilm. The Pennsylvania photographs from that set are also available through the University of Louisville website. Stryker also gave some 40,000 duplicate prints to Romana Javitz, the first head of the Picture Collection at the New York Public Library, and these are located in the Research Library's Photography Collection. (In fact, Javitz occasionally lent photographs back to Stryker as he attempted to fill gaps in the subject areas of the fsa's collection.) Ben Shahn's photographs from this period are on deposit at the Fogg Museum at Harvard University as well as the Library of Congress, and his photographs are available on the Fogg Museum website. And the Metropolitan Museum of Art houses the Walker Evans Archive, including many of the photographs he took in Pennsylvania. Virtually all of these photographs are also available on the Library of Congress website. Information about these resources can be found in the on-line catalog entries.

The on-line catalog of Pennsylvania photographs was compiled in conjunction with the publication of Times of Sorrow and Hope and is available through the Pennsylvania State University Libraries website. Questions about the catalog can be addressed to Allen Cohen at ahcohen@worldnet.att.net.

Bendavid-Val, Leah. Propaganda and Dreams: Photographing the 1930s in the USSR and the U.S. New York: Edition Stemmle, 1999.

—. Walker Evans at Work: 745 Photographs Together with Documents Selected from Letters, Memoranda, Interviews, Notes. With an essay by Jerry L. Thompson. New York: Harper and Row, 1982.

Just Before the War: Urban America from 1935 to 1941 as Seen by Photographers of the Farm Security Administration. With an introduction by Thomas H. Garver and prefatory notes by Arthur Rothstein, John Vachon, and Roy Stryker. Catalog of an exhibition held at the Newport Harbor [Calif.] Art Museum, September 30–November 10, 1968, and the Library of Congress, February 14–March 30, 1969. New York: October House, 1968.

People and Places of America: Farm Security Administration Photography of the 1930s. An exhibition organized by Richard Kubiak and held at the Santa Barbara [Calif.] Museum of Art, October 15–November 20, 1977.

Times of Sorrow and Hope