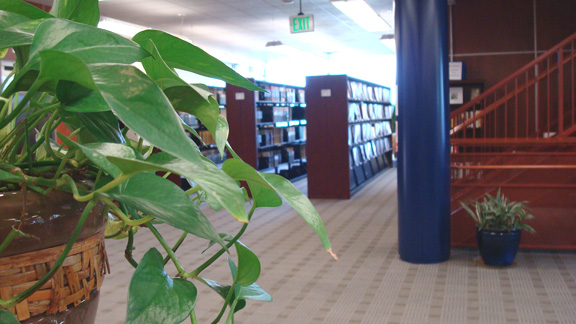 The Library at Penn State York is known to have existed since at least 1957, as verified by a document passed down through several decades and several librarians. That document shows York as being one of thirteen Penn State campuses, at the time having a collection of 581 books and 24 magazine and journal subscriptions. During the academic year of 1957-58, items from that collection circulated 235 times. The location of that library within the main classroom building is uncertain. During the late 1960’s, though, the Library is known to have been located in the main classroom building in the area directly across the hall from the mail and copy room, currently the site of the Chancellor's Conference Room. How much the Library grew during that time is uncertain, but both the size of the collection and its use by a growing student population warranted a much larger space, which came about as a newly constructed and stand-alone building.

That Library building, now refashioned as the Elias Science Center, was completed and occupied in 1969, and became the third campus building. It had an upper level of about 9,000 square feet that housed the Library’s collections, staff offices, and study tables and carrels. A smaller lower level had several individual study rooms, a classroom and a faculty resources room. The earliest statistics available for this building, from the 1971-72 academic year, show a collection size of 11,489 books and 200 magazine and journal subscriptions. Circulation of library materials that year was 5,508.

That building seemed to have served library users relatively well during the 1970’s and early 1980’s, when student enrollment grew to around 800, and the space available was enough for the expanding book collection. By the mid-1980’s however, study space became a big concern as additional shelving ranges began to be added to accommodate a larger book collection, and as a significantly larger student body competed for available seating. Further putting a premium on comfortable and usable study space was the loss of all the study rooms on the lower level, which had been ceded over to non-library uses, such as faculty office space, multimedia labs, and the campus Learning Center. Because of the Library’s need for increased and more usable space, Library expansion was included in a 1986 building plan in which the Library building would have been extended significantly, although most of the expanded space would have housed an auditorium, faculty offices, and computing labs. That building plan instead evolved into the campus’ fourth stand-alone building, now named the Grumbacher IST building, and with that change the Library lost its chance at gaining additional needed space.

After the completion of the IST building in 1989, campus strategic planning identified a Library expansion and a theater/auditorium as the highest priority campus need.  Beginning in 1990, local legislators submitted bills to the state legislature that would have authorized and funded this new building project, but it wasn’t until 1997 that the project was approved for the fourth year of a five year University/Commonwealth capital construction plan. Various delays pushed back the start of the project, and finally in 2005, the fifth campus building was completed, housing the Glatfelter Library, the Pullo Performing Arts Center, and six classrooms, including the Library’s instructional lab and an art studio. At the time of the move to the new building, the Library’s book collection stood at 54,140, and magazine/journal subscriptions numbered about 250, a considerably larger collection than the one that first populated the 1969 building. At 19,000 square feet, distributed over two levels, the new library was over twice as large as the former one, and was designed to accommodate collection growth for at least two decades. The new library was a significant upgrade, not only in space, but also in style, comfort, and all-around usability.