We are a Federal Depository Library 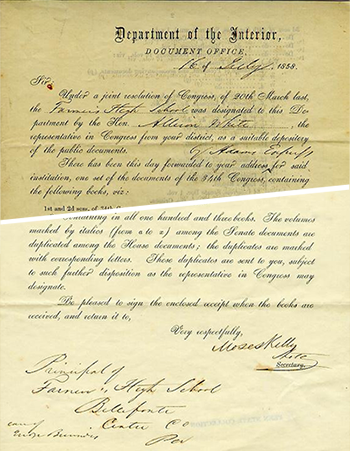 The partnership between University Libraries and the Federal Government began on December 1, 1813 when the 13th Congress passed a Resolution ordering 200 extra copies of the House and Senate Journals be printed and "transmitted to the executives of the several states and territories, as shall be sufficient to furnish one copy ... to each university and college in each state". This legislation continued in effect for 44 years. During that time, the Farmers' High School was established in 1855 in Bellefonte, Pennsylvania.

In 1858 the 34th Congress went on to create the basic depository system used today and established the right of each congressional representative to designate a library within his district to receive these materials.

Accordingly, on July 16, 1858, Representative Allison White designated the Farmers' High School as a suitable "depository of public documents". The original letter [seen at right] establishing this depository status and listing materials sent to the Farmers' High School can still be found in the Penn State University Archives (104 Paterno Library).

Meanwhile, the Farmers' High school went on to be renamed the Agriculture College of Pennsylvania and was designated as the land-grant college of the Commonwealth of Pennsylvania. In 1907, Congress passed yet another piece of legislation establishing "that all land-grant colleges shall be constituted as depositories for public documents, subject to the provisions and limitations of the depository laws".

This series of laws established the Penn State University Libraries' depository library partnership with the federal government. It also provided a strong collection of federal depository materials and supporting research collections. The University Libraries continue to build upon this strong foundation and the staff and librarians in the Microforms & Government Information play an important role in maintaining and supporting these collections.. These collections are made available to the faculty, staff, and students at The Pennsylvania State University. In addition, our depository collection serves the citizens of the 5th Congressional District.

U.S. government collections in the Penn State Libraries are particularly strong in the following areas:

In order to supplement these collections and to ensure their completeness, Microforms & Government Information purchases a wide range of U.S. government publications from commercial publishers. Many of these materials are available only in microformat (microfiche, microfilm, or microcard), but are a valuable part of, Microforms & Government Information U.S. government collections. All materials, regardless of source or format, are collected to complement the University's curriculum and research needs. Most print materials and electronic formats can be checked out. Microformat materials do not circulate, however, the Libraries have equipment to view, print, or scan the information on the microformat documents.

Blissell Library, Penn State New Kensington, serves the citizens of the 12th Congressional District of Pennsylvania with a variety of government information resources.

Use the Libraries Government Information Subject Guide to learn about finding Federal Depository Library documents in the Libraries and online.