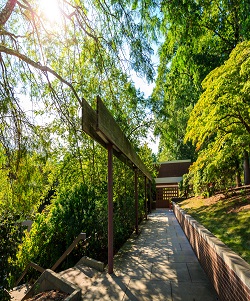 The John D. Vairo Library is named after the founding Campus Director. John Vairo (1920-2012), an associate professor of journalism at the university, was appointed Campus Director, effective January 1, 1967. The library occupied classroom space in the original campus facility in Chester, Pa. When the campus moved to its present location in 1970, the Library was located on the first floor of the Main Building. The current library facility opened in December 1980, was dedicated in September 1981, and was named in honor of John Vairo in September 1995. An endowment to support the growth of the collections was established to honor John Vairo on the occasion of his retirement in 1986.

The upper floor is an interactive area with large study tables, open computer labs, group study rooms with whiteboard walls and mediascape computer sharing with dual monitors. A Media Commons area and a One Button Studio offer technology to support production of a wide range of video and multimedia projects.  The upper floor of Vairo Library also houses tutorial services: the STEM Lab, Brandywine Learning and the Writing Studio. The lower floor of Vairo Library is designated as the Quiet Zone, where talking is not permitted. This floor is furnished with private study carrels and individual computer workstations.

Both floors house the library's various collections, which have been carefully chosen by campus faculty and librarians to support Brandywine course assignments. The library's University-wide online catalog and electronic databases offer access to millions of books and thousands of full text research articles via 90 computer workstations in the computer lab areas. Penn State Wi-Fi is available to students, faculty and staff, and free AT&T is available to all other patrons

In addition, the library has expanded to include a browsing collection of popular nonfiction and fiction books, a developing board game collection, and an ever-expending graphic novel and comic book collection.

If you have questions or need assistance, ask for help at the Vairo Library reference desk or contact a library staff member!