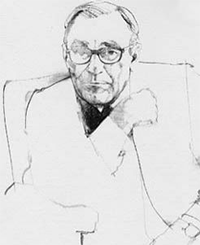 Born July 13, 1918, in Lakewood, Ohio, he graduated from Penn State in 1940 with a B.S. in metallurgy. Working at the Naval Ordnance Lab in White Oak, MD., during World War II, he met and married Marie L. McIntyre on Feb. 17, 1945. He received the Navy Distinguished Civilian Service Award.

Moving to Pittsburgh, he worked at Koppers, Inc., becoming president in 1960, and then served as CEO and chairman of the board from 1967 until his retirement in 1982. He held a chair on the Stock Exchange; was director of the Institute for Advanced Study and the Hudson Institute, served on the Federal Reserve Board of Pittsburgh; and was chairman of the Conference Board. He was also a member of the Committee for Economic Development, the President's Export Council and the Public Education Fund.

Dedicated to the community of Pittsburgh, he helped found NEED, National Alliance of Business and PACE. He is honored at Freedom Corner. He also served on the boards of the Alleghany Conference, Blue Cross, University Presbyterian Hospital, Carnegie Mellon University, and the United Way.

Retiring in 1982, the Byroms moved to Carefree, Ariz. Fletcher continued his dedication to education by establishing a pre-school program for disadvantaged children. In 2001, he returned to State College, building on his activities, which has included president of the Alumni Association, serving on the Board of Trustees and as mentor to Honors College students. Over the years, he received the Alumni Fellow Award, the David Ford McFarland Award, Distinguished Alumni Award and the Pioneer Medallion. The Fletcher L. Byrom Library of Mineral Science is named in his honor.

Fletcher is survived by his wife, Peg, of 64 years; a son, Mike; two daughters, Carol and Susan; six grandchildren and two great-grandchildren.