There are contemporary standards for the horizontal positional accuracy of print maps and geospatial data that are directly related to map scale (i.e. FGDC Geospatial Positioning Standards). Most historic fire insurance maps were based on extensive and careful field measurements and surveys (Sanborn Surveyor’s Manual 1936), and were published at very large map scales (often 1:50). (They are sometimes called “engineering drawings” because of their very large map scale and the fact that they are often missing common elements of a map like a north arrow and legend). By contemporary standards a map or geospatial dataset published at 1:50 map scale would require an accuracy of less than 0.05 feet — a standard that is certainly not met by historic fire insurance maps, but then again also not met by most contemporary geospatial data layers.

What then is the accuracy of 19th and early 20th century fire insurance maps and which contemporary base layers are appropriate to use to georeferenced them? The answer may surprise you.

Our initial results suggest that the geometric accuracy of Sanborn Fire Insurance Maps of Pennsylvania is actually quite good compared to many readily available geospatial data base layers. To arrive at this conclusion we randomly selected 138 map sheets and used a spatially-balanced random selection of 25 ground control points to quantify the horizontal positional accuracy of fire insurance maps versus the most accurate reference base data (PAMAP ortho-imagery), that was readily available for our study area. We graphed the distribution of positional errors of Sanborn map sheets (purple in the figure below), and four commonly used base data sources for georeferencing — U.S. Department of Agriculture National Agricultural Imagery Program (USDA NAIP — in red); ArcGIS Online base imagery (AGOL — in light green), Open Street Map (OSM — in dark green), and PAMAP ortho-imagery (blue). To read the below figure, the x-axis shows the positional errors in feet and the y-axis shows the spread of those errors with higher peaks being more tightly concentrated errors at a given level. 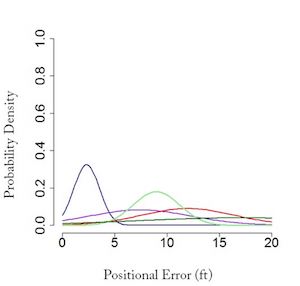 The reference base data that we used (PAMAP in blue), was the most positionally accurate data. Note, however, that the distribution of Sanborn errors (purple) overlaps a little with the distribution of PAMAP errors (blue). This means that in a few cases, we cannot tell which source of geographic information, PAMAP or Sanborn maps is more correct? What’s more, had we used any of the other three reference base data options to georeference the Sanborn maps we would have risked degrading the quality of the geographic information presented on them. This conclusion comes from the strongly overlapping distributions of errors between Sanborn maps, USDA NAIP imagery, AGOL imagery, and OSM data.

When georeferencing historical maps that are large scale and/or based on intensive field survey it is a best practice to use the most positionally accurate geospatial reference base data or else you may risk degrading the quality of historical geographic information.

Future work — we’re still refining our methods for quantifying the accuracy of Sanborn Fire Insurance maps and will continue to share updates of our findings.

Funding for this project has been provided by the Penn State University Libraries Bednar Internship fund.