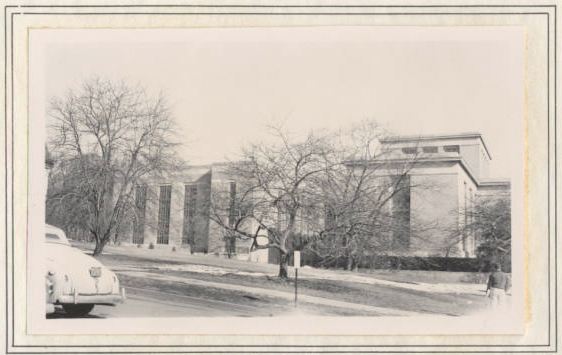 ​Penn State's first library collection consisted of approximately 1,500 volumes in agriculture and the sciences and was housed in Old Main, along with most other college facilities. The nineteenth-century library was considered an auxiliary to study and by 1888 was open six hours a day. By the turn of the century the library had grown to nearly 20,000 volumes. The overcrowding finally was relieved by construction of the Carnegie Library, a gift of steel magnate and college trustee Andrew Carnegie.

The library moved to what is now the Carnegie Building in 1904. The 50,000-volume-capacity building had the beginnings of some special collections, including government documents and the Penn State Room. Departmental libraries in a number of the sciences also had been established by this time, and some continue today as our branch libraries. The collection eventually outgrew the building, which by 1940 contained three times as many volumes as the number for which the building was designed.

A new main building, now Pattee Library, was constructed as part of a multibuilding Public Works Administration-General State Authority project in the 1937-40 period. As Pattee Library grew, three major additions were made, the most recent being the East Wing in 1973. Although the holdings of the University Libraries had grown to some 800,000 volumes by the mid-1960s, it was recognized by the University that this was insufficient to support a major research-oriented university, and budgetary support for the University Libraries increased rapidly.

Pattee Library, connected to Paterno Library at the Curtin Road entrance, houses the Arts and Humanities Library, the Gateway Commons, the main Circulation area, and the extended Hours Library, which encompasses the Microforms and Newspapers Library and the Reserve Reading Room.  Until spring 2018, MacKinnon's Cafe was located adjacent to the News and Microforms Library, at the ground floor west entrance to Pattee. Due to construction, the cafe was closed and News and Microforms was temporarily relocated.

Today, the University Libraries comprise 36 libraries at 24 locations throughout the Commonwealth of Pennsylvania. Since completion of the new Paterno Library, other new facilities have opened, or begun construction, at the Altoona, Berks, Harrisburg, and York campuses. At University Park, two new subject libraries opened in 2005—the Physical and Mathematical Sciences Library, combining the collections of the former Physical Sciences and Mathematics Libraries, and the Architecture and Landscape Architecture Library, newly relocated from cramped quarters in the old Engineering Units to the new Stuckemann Family Building, home of the School of Architecture and Landscape Architecture. During the fall and spring semesters, a portion of the Pattee-Paterno Libraries, including the Knowledge Commons, is open 24/5.

The Libraries' cataloged collection now approaches 5 million items. Roughly 100,000 volumes are added to the collection annually. The libraries currently operate two annex facilities where less-frequently-used materials are housed, and plans for a new repository building are in the works.