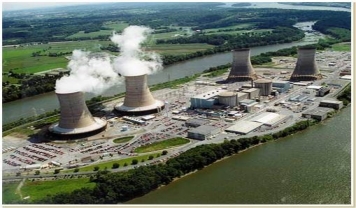 On March 28, 1979 at 4:00 AM, a minor malfunction occurred in the system which feeds water to the steam generators at the Three Mile Island (TMI) Unit 2 Nuclear Generating Station. This event led eventually to the most serious commercial nuclear accident in U.S. history and fundamental changes in the way nuclear power plants were operated and regulated.
The accident itself progressed to the point where over 90% of the reactor core was damaged. The containment building in which the reactor is located as well as several other locations around the plant were contaminated. The subsequent cleanup and recovery effort is documented in the collection associated with this Web page.

Unique amongst the items are the over 3700 video tapes which document the extensive effort to cleanup the plant and to understand exactly what happened. The technical reports summarize both the findings as well as provide an historical account of the recovery effort.

Those of you wishing to understand the accident are referred to the following discussion.

TMI Unit 2 is located outside of Harrisburg, PA along the Susquehanna River. The reactor system is a Babcock and Wilcox 900 MWe PWR. The system uses once through steam generators and has an unusually small primary coolant system volume.

During routine maintenance of the secondary side, feedwater to the steam generators was interrupted. The loss of feedwater caused the primary system to overheat causing the primary system pressure to increase. The reactor protective system scrammed the reactor but not before the system pressure caused one of the pressure regulating valves to open. This sequence of events was exactly what would be expected in such an event.

Unfortunately, when the pressure in the reactor decreased, the valve failed to completely close resulting in a small break loss of coolant accident (SBLOCA). The emergency core cooling systems actuated as the system pressure continued to drop. Because of an incorrect interpretation of the instrument readings the operators terminated the operation of these systems. This caused the core to eventually overheat. The fuel cladding rapidly oxidized releasing hydrogen to the containment and further accelerating the process. Eventually, a significant portion of the fuel melted and flowed into the lower part of the core and lower reactor vessel head.

Despite the severity of the damage, no injuries due to radiation occurred. There were however, significant health affects due to the psychological stress on the individuals living in the area. The defense in depth approach worked resulting in containment of the radioactivity in the containment building and enabling the operators to eventually cool the damaged core and regain control of the system.

The resulting contamination and state of the reactor core lead to the development of a ten year cleanup and scientific effort documented in this collection. The accident and subsequent analysis of it changed the way nuclear power is used and regulated both here and abroad.