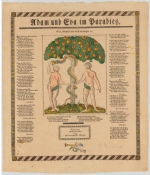 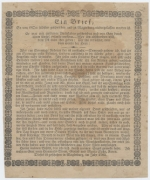 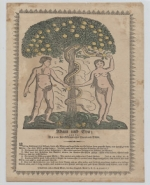 Broadsides are posters (image and/or text based) designed to inform or educate the public. They exist in forms such as advertisements, poems, ballads, and public announcements.

"Broadsides are pieces of paper printed on one side, and they were issued to convey messages. Usually published without illustrations or downplaying them in favor of text and vignettes, broadsides were customarily posted in prominent locations for as many people as possible to see. They promoted sales of countless forms of merchandise, announced the arrival of new products, proclaimed when meetings would take place, reminded their readers of current events, and served a host of other purposes. Broadsides were an inexpensive way to reach a wide audience and were a major instrument for communicating before the development of mass media. Truly ephemeral in nature, broadsides were mostly intended for immediate use and then discarded." (Definition by Richard McKinstry from the Ephemera Society of America Website)

The use of broadsides for research, teaching and learning develops skills such as critical analysis, critical thinking, historical analysis, and textual analysis. The Pennsylvania German Broadsides and Frakturs provide a connection to the past as they "speak for themselves" of events, concerns and issues of the time. They continue to offer possibilities of new inquiry through new input into historical questions. Users should find the broadsides recorded here rich in subject areas such as folklore, religion, hymnology, German language, anthropology, and art. The broadsides expand on what is known about German settlers in the Middle Atlantic region. As Wellenreuther notes, "They suggest settlers were consciously developing their own German-language world -- in religious as well as political and economic terms -- within a larger English-language culture. They strongly indicate continuous, vivid ties between North America and the key regions from which the Germans came, particularly Württemberg and Baden. They supply material for the rewriting of radical pietistic thought, on the one hand, and for a description of the settlers' remarkable aloofness from established churches like Lutheranism or the Reformed church on the other."

TIPS: Google translate is a helpful tool for translating German to text to any language needed. In addition, see this fraktur chart developed at Yale's Irving S. Gilmore Music library for help in deciphering fonts.

This guide is offered only as a suggested reference for using this collection. Below are process-oriented, methods-based strategies geared to emphasize useful patterns of thinking. Since research, teaching, and learning are complementary outcomes, these strategies are likely to overlap when put in practice.

Suggested methods of analysis: Question what you see.

Suggested classroom provocations for dialogue: Invite dialogue, paraphrase back what you hear others say

The Benefits of Thinking Aloud

"In think-alouds, teachers make their thinking explicit by verbalizing their thoughts while reading orally. . . Students will more clearly understand the strategies after a teacher uses think-alouds because they can see how a mind actively responds to thinking through trouble spots and constructing meaning from the text" (Vacca and Vacca 1999, p. 53).Think alouds make text and thought audible, providing a way for social and individual learning experiences.

Resources and Books for further Consultation