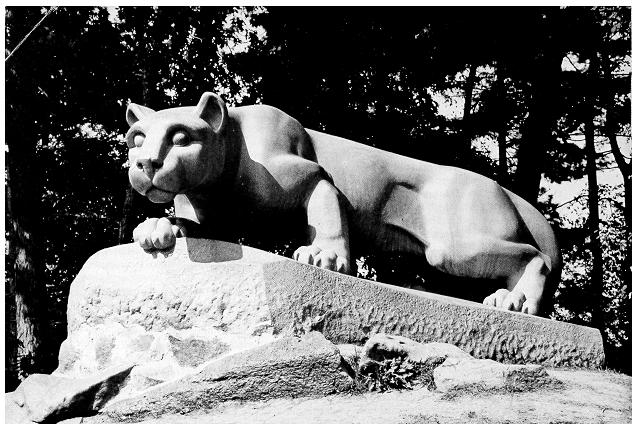 "Every college the world over of any consequence has a college emblem of some kind—all but The Pennsylvania State College. . . . Why not select for ours the king of beasts—the Lion!! Dignified, courageous, magnificent, the Lion allegorically represents all that our College Spirit should be, so why not 'the Nittany Mountain Lion?' Why cannot State have a kingly, all-conquering Lion as the eternal sentinel?" So wrote H. D. 'Joe" Mason, a Penn State senior, in the March 1907 issue of the student publication The Lemon. Mason had been advocating the adoption of a college symbol since the spring of 1904, when he had visited the campus of Princeton University as a member of the baseball team, Embarrassed that his school had no counterpart to the famous Princeton Tiger, Mason invented one on the spot: the mountain lion.

The student body liked Mason's idea. The mountain lion was indeed a "dignified, courageous, magnificent" animal, and it had roamed Mount Nittany and environs until the 1880s. And by assuming the title Nittany Lion, the beast would have a character unlike that of any other college's mascot. (The origin of the word "Nittany" is obscure. The most commonly accepted explanation traces its derivation to Indian words meaning either "single mountain" or "protective barrier against the elements," in either case a reference to what white settlers called Mount Nittany.) No vote was even taken on the adoption of the Nittany Lion. It scented to be such an appropriate symbol that students, faculty, and townspeople accepted Mason's idea almost from the first. Two alabaster African lion statues, left over from the Pennsylvania exhibit at the 1904 St. Louis Exposition, were placed atop the columns at the main campus entrance on College and Allen streets in 1907. These were the first tangible lion symbols, and students affectionately referred to them as "Pa" and "Ma." In the 1920s, a pair of stuffed mountain lions was placed in the Recreation Building to watch over athletic events. About that same time, the tradition began of having a student dressed in a furry lion outfit appear at football games.

During the 1930s, students launched a campaign for a lion shrine, a place where they could gather to hold pep rallies and celebrate sports victories (and have their picture taken with Mom and Dad). The Class of 1940 voted to give as its gift to their alma mater the sum of $5,430 to pay for the construction of such a shrine. A committee was formed and after much deliberation chose a location between the Recreation Building and Beaver Field, where the lion could be framed against a natural setting of trees, grass, and shrubs. Sculptor Heinze Warnecke was retained to carve the lion at the site _from a thirteen-ton block of limestone. Warnecke worked through the summer of 1942 and finished the statue in time for it to be dedicated at homecoming ceremonies on October 24.

Since then, the Nittany Lion shrine has come to be one of the most visited, photographed, and talked about places on the University Park Campus. And the image of the Nittany Lion has been etched not only in stone, but in the memories of tens of thousands of Penn Staters. 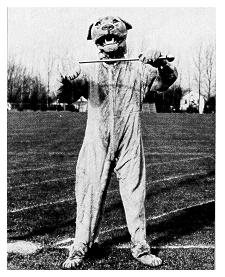 By the '40s, the Lion was portrayed as a creature of the PA mountains. 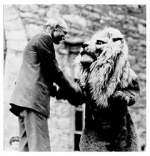 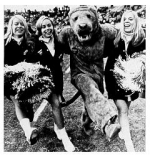 The Lion and its "cubs"—replicas made for the Commonwealth campuses in 1969.