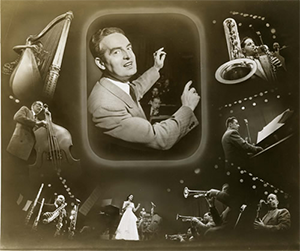 Fred Waring, born in Tyrone, Pennsylvania, former member, Board of Trustees and Distinguished Alumnus of Penn State, left an incredible collection of music, art, history, and culture, all housed in the Fred Waring’s America at the University Libraries. His legacy includes 1,100 songs and 103 albums recorded; 24,373 songs performed; 2,650 radio broadcasts and 200 television shows—entirely preserved on recordings located in the collection.

The collection is important to Penn State, America, and the world as a resource for historians, musicians, artists, educators, and students of all ages.