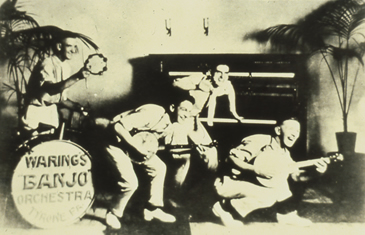 Fred Waring’s story begins in Tyrone, Pennsylvania, where he was born in 1900. Music was always part of his family’s life—he made his first stage appearance at the age of five and at age twelve became the leader of his hometown’s Boy Scout Fife and Drum Corps. As a teenage boy in 1917, Waring and his neighborhood friend Freddie Buck joined the “Waring-McClintock Snap Orchestra” formed by Waring’s younger brother Tom and drummer Poley McClintock and the quartet began to perform at local dances.

When the Guy Hall Band, an African American jazz band from Columbus, Ohio visited Tyrone, Hall’s banjo and vocal sounds inspired the group to combine banjos, a jazz orchestra, and glee club style vocals. Now known as Waring’s Banjo Orchestra, they became distinctive as a singing band—not one that just featured a vocal solo or chorus once in awhile, but performed on their instruments and sang almost all their numbers. They also started using some unusual visual effects to make their performances more interesting and continued performing for fraternity parties, proms, and dances.