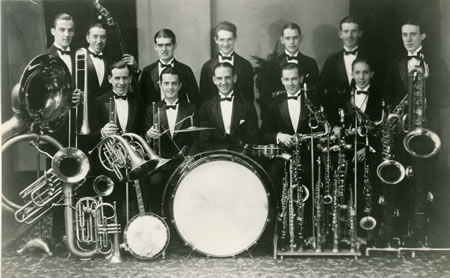 By 1922 the newly renamed Waring’s Pennsylvanian’s had expanded to ten members and was growing more popular. Waring was no longer playing the banjo and singing in the band – he had become the leader and was spending much of his time booking shows. At the same time, he was studying Architectural Engineering at Penn State. Toward the end of his senior year, he had to decide whether to finish his studies or leave and go into the band business full time.

With the blessing of Penn State’s Dean of men, Dean Warnock, he decided to make music his life and, in March of 1922, secured the band their largest gig to date—an annual “J-Hop” or dance, at the University of Michigan in Ann Arbor. They were not the headliners, but drew the largest crowd with their unique fast-paced dance rhythms and non-stop exciting performance. Their hot performance at the dance led to an appearance on a Detroit radio station, and their national success began when they were then booked to perform in Michigan Theatres and began playing the mid-west Vaudeville circuit. 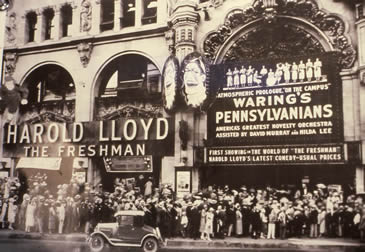 By 1923 Waring’s Pennsylvanians, as they were now known, were on their way to fame and stardom. That year they traveled to Los Angeles to participate in the opening of the legendary Grumman’s Metropolitan Theatre, where they played for six weeks. At the same time they were signed by Victor Talking Machine Company to record one of their songs, “Sleep” which became a No. 1 hit for them, selling 40,000 copies the week of its release. "Sleep" is an example of how Waring and his band were recording pioneers—the song was the first popular music record to use a vocal chorus.

Throughout the 1920s, Waring’s Pennsylvanians were one of the top attractions on the vaudeville circuit. Their collegiate-flavored shows along with their Victor recording of the song “Collegiate” started a national trend. Recording pioneers again, “Collegiate” was one of the first recordings to use electronic microphones. 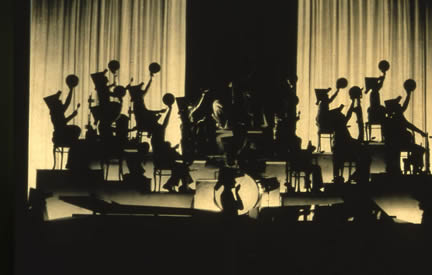 In 1925 they were invited to perform the ‘prologue’ before the new Harold Lloyd film The Freshman. They were billed as "America’s Greatest Novelty Orchestra" on the marquee of the Grauman Theatre where the movie premiered. They performed live before the movie for six weeks and then traveled the country with the film, performing a live act before each showing of the film.

At the height of the Jazz Age in the 1920s, Fred Waring’s band was one of the hottest jazz bands on the vaudeville circuit and their Victor recordings continued to be hit sellers. Their “I Scream, You Scream, We All Scream for Ice Cream” made the frog-voiced drummer Poley McClintock (who also played melodies on his teeth) a noted attraction.

Truly different and innovative, Waring’s Pennsylvanians offered many firsts. They performed a lively fast-paced show that included playing their instruments, singing, and innovative visual effects devised by Waring. They had a synchronized megaphone routine as well as a new visual showstopper dreamed up around a catchy tune of the day "Dancing Tambourines." It was a ballet of lights on a darkened stage—each Pennsylvanian held a light made out of a round tin baking pan with a flashlight soldered in it—made by Waring. 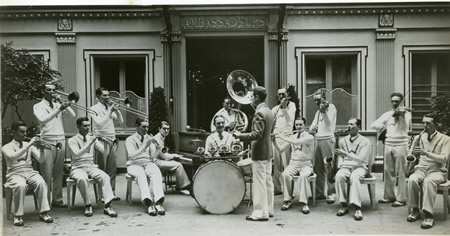 Next, Waring devised a much more complicated scenario called "Dancing Dominoes," based on the popular 1920s game of dominoes. He took an oblong cake pan, soldered in a flashlight, and covered it with shellacked linen marked with domino dots. The men held one in each hand and not only had to press a button in either hand on a certain beat but also had to move around quickly on a totally darkened stage. These complicated routines thrilled and dazzled audiences.

The infant motion picture industry was beginning to attract Waring’s attention in the late 1920s. As these “talking pictures” first began, the leading production company, Warner Brothers, used leading artists of the day for short films as a way to get a foothold in this new business. In 1927, they hired Waring’s Pennsylvanians to make a short film using Vitaphone, an early sound on film process used from 1926 to 1930. 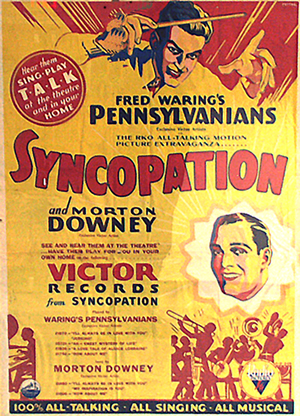 ​The Pennsylvanians became international in 1928, when they were booked for two months at the famous Theatre-Restaurant des Ambassadeurs in Paris, France. The show would be written by Cole Porter (which incidentally was the start of a long professional relationship between the two men) and performed by Clifton Webb, then known as a dancer; Morton Downey; and a bevy of pretty showgirls. The Pennsylvanians would also perform their arrangement of Rhapsody in Blue with Gershwin himself at the piano.

Before they could make a grand tour of Europe, the group was called back to the states to appear in the Broadway show Hello Yourself.

At the same time they were performing in Hello Yourself, they made trips to Brooklyn to make one of the first all talking, all musical films Syncopation. The film starred Dorothy Lee (who was also in Hello Yourself), as well as Morton Downey and Barbara Bennett.

“Jericho,” a song the group performed in Hello Yourself as well as in Syncopation, became a big hit for them.