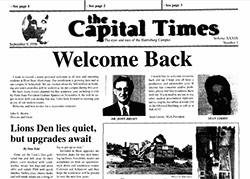 Where did the "Harrisburg Rock Festival" of 1971 take place? What were the bathtub races of 1972? And what were college students doing during the time of the accident at Three Mile Island in 1979? Answers to these questions and more can be found in Penn State Harrisburg's new online archive of student newspapers from 1969-2010. Originally published as The Roundtable, the Penn State Harrisburg college newspaper has provided an invaluable perspective on the events and people who have shaped the college over the past four decades.

Despite frequent name changes, with titles such as The Capitolist, C.C. Reader, Capitol Campus Reader, Capitol Times, and The Capital Times, the student-run newspaper serves as a time capsule and can be used as a primary source for research about the issues and events that were important to Penn State Harrisburg students. A review of the newspaper brings several recurring themes to light. Some of these topics include tuition increases, funding issues, and budget cuts; campus expansion, building construction, and improvements; technology upgrades and troubleshooting; student activities, clubs, and social events; and changes and additions to the faculty, academic programs, as well as student government initiatives and concerns.