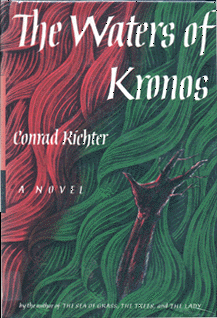 Collection contains notes about the novel as well as other materials such as correspondence and financial records. The Waters of Kronos is the story of John Donner, an aging writer who has driven from the West Coast back to Unionville, Pennsylvania, where he grew up. He discovers that the town he once knew has been submerged under the Kronos River because of a dam created to supply power for a hydroelectric plant. After viewing where the residents of the town cemeteries have been relocated, Donner finds himself on a road that went through Unionville to coal mines, where he improbably sees a wagon carrying coal and seemingly rides this wagon into the past. Once there, he finds it is the night before his grandfather's funeral, and although he knows the town and its inhabitants, they do not know him. The novel proceeds from there.

Appearing in 1960, the novel won the National Book Award in 1961. Frank Wilson's review of the Penn State Press edition in the July 13, 2003 Philadelphia Inquirer asserts that the novel is "at once a searing examination of conscience and a heartfelt act of contrition. John Donner learns, not that you can't go home again, but that you can't really leave home in the first place. Home is the baggage you carry wherever and however far you wander."